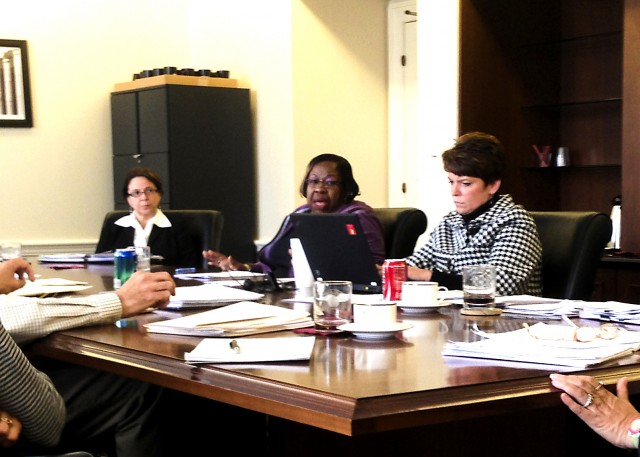 Roughly a month after Grand Rapids Community College Board Trustee Richard Ryskamp suggested that a formerly gay speaker be invited to speak on campus, other board members who disagree with his views have spoken out.

James spoke up two days after Trustee Terri Handlin shared her regret for keeping silent after Ryskamp suggested during February’s board meeting to have a speaker at the Diversity Lecture Series who has a different view on gay issues than LZ Granderson, a journalist and gay rights activist who spoke at the series in February.

James said she has received a lot of negative feedback from people within the community about the comment made by Ryskamp.

“I’m calling people to do things for me on other boards that I sit on…and they want to talk about what’s going on here and this board, and it’s very…discouraging to me,” James said.

At the retreat, she told fellow board members that she’s hearing comments from the community, including:

“What is wrong with that man? He’s against gay people.”

James expressed concerns that Ryskamp’s comments cast GRCC in a negative light and said that “these are intelligent people (saying these things).”

She said she has also heard concerns from employees of GRCC who are part of the LGBT community who are “starting to be very uncomfortable” with these recent conversations.

James also said she felt the way Ryskamp handled his closing comment after Trustee Terri Handlin at Monday’s board meeting was inappropriate, pointing out that no one rebutted Ryskamp’s comments during the February board meeting.

“When his time came, he didn’t give comments,” James said, then directing her speech to Ryskamp. “You gave a rebuttal responding to Terri’s comments. I thought that was just totally out of order. I really did.

Other issues the board members decided need to be addressed are what the board’s business should be, whether trustees should inform the president when on campus, and making sure mail to the board is read during meetings.

The latter two issues are in relation to Ryskamp being on campus to meet separately with two out of 18 student leaders that signed a letter requesting an apology for his comments. The letter was not read publicly, but neither were multiple letters to the board in the past, an issue the trustees agreed needs to be addressed.