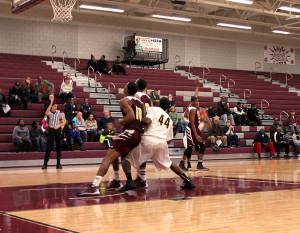 Despite playing a “home” game at Aquinas College, the GRCC mens basketball team beat the Jackson Community College Jets 91-87 Wednesday night. The game came down to the wire and ultimately resulted in an overtime win for the Raiders after trailing 33-37 at halftime.

The Raiders found out that a leaking roof would prevent them from playing in the Ford Fieldhouse as scheduled. Even with that distraction, the team won their fourth consecutive game, bringing their record to 16-7.

Raider sophomore Miles Robinson led GRCC in points, with 23. He went 3 of 7 in 3-pointers and made all six of his free throws. Feshman DeMarkus Stuckey tacked on 19 points of his own.

GRCC only has three games left to play in the regular season. The first is scheduled for 7:30 p.m. Friday in the Ford Fieldhouse against Lansing Community College.