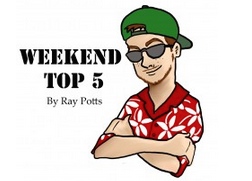 The comedic play “One Man, Two Guvnors” will be performed at Circle Theatre on Friday at 7:30 p.m. Set in 1960’s England, “One Man, Two Guvnors” tells the story of an out of work musician who get’s hired by a local gangster and an elitist mob member. Tickets are $25 and Circle Theatre is located at  1607 Robinson Road SE. For more information, visit www.circletheatre.org

Downtown Lowell will be hosting the Riverwalk Festival on Friday and Saturday. Events will include a parade, live concerts, kayak and canoe races, fireworks and more. Festival hours are 5 p.m. to 9 p.m. Friday and 10 a.m. to 4 p.m. on Saturday. The event is free and is all ages. More details can be found at www.discoverlowell.org

Fireworks at the Intersection

The Detroit-based pop rock group Fireworks will be performing at the Intersection on Friday. Opening acts include Young Statues, Better Off, and Another October. The Intersection is located at 133 Grandville Ave SW. The show is all ages and the doors open at 6:30 p.m. Tickets are $14 day of the show, more information can be found at www.sectionlive.com

American Wifi at the Pyramid Scheme

The rock group American Wifi is performing at The Pyramid Scheme on Friday. Opening acts are Bowery, The Cactuses, and Poor Boy Romance. The show is all ages and tickets are $10 day of the show. The Pyramid Scheme is located at 68 Commerce SW, details can be found at www.pyramidschemebar.com

‘Dawn of the Planet of the Apes’

The second film in the “Planet of the Apes” series reboot, “Dawn of the Planet of the Apes”, is opening on Friday. Starring Andy Serkis as the ape main character “Caeser”, the cast also includes Gary Oldman, Jason Clarke and Keri Russell. Tickets are $8.50, more information can be found at www.celebrationcinema.com