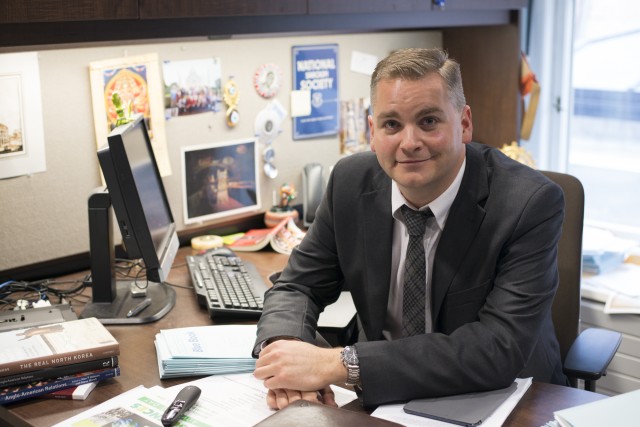 Robert Hendershot, 37, World Historian at Grand Rapids Community College, has traveled to many countries in his adult life, but for the last seven years has taught for the same college where he earned his associate’s degree 16 years ago.

After graduating from Rogers High School in 1996, Hendershot enrolled at GRCC with no clear idea of what career path to pursue. Like many college students, he started taking classes hoping that something would fall into his lap.

Not knowing what he was going to major in, Hendershot started taking general education classes. One of the classes he took that first semester was a history class with the now retired professor, who Hendershot referred to as, “an institution,” Roger Schlosser. The introductory history class was different from any other Hendershot had previously taken.

“I discovered that when I studied history in college I actually liked it,” Hendershot said. “Unlike high school, where it’s memorizing a lot of names and dates, in college you get into the how and why things happened. I hated it in high school, loved it in college.”

What Hendershot initially thought was just a passing interest, turned into a full on passion.

“I got bit by the discipline,” Hendershot said. “So I decided to major in it, but I didn’t know what that meant.”

After graduating with an associate’s degree in arts, Hendershot moved on to Michigan State University and later Central Michigan for graduate school.

“(At MSU) I did well,” Hendershot said. “And in humanities and social sciences, when you do well you go to grad school. If you do well in grad school, eventually they put you in front of a classroom and say, ‘teach.’ I liked it, surprisingly.”

Hendershot stayed with CMU to work towards a doctorate in the Trans-National Program. This allowed him to travel abroad and live in Glasgow, Scotland for an entire year. There he studied at the University of Strathclyde and shared a flat with students from all over the world.

“They were an interesting bunch,” Hendershot said. “We still keep in touch and it’s good to get together or hear from them.”

After earning his Ph.D., Hendershot taught  at CMU before being offered a visiting teacher position at Grand Valley State University.

“After (GVSU) I was prepared to go anywhere,” Hendershot said. “Then a friend told me about an opening at GRCC.”

The World Historian position at GRCC was the open spot at the college.

“How perfect is that?” Hendershot thought to himself. “They’re looking for me.”

Hendershot had not been back to the college and hadn’t really thought about it for almost 10 years.

“It’s very rare in academia,” Hendershot said. “But it’s perfect. It’s in my hometown, my school … I never thought I’d end up back at GRCC.”

Since his return to GRCC Hendershot has become a fixture of the Race and Ethnicity conferences every year. Past topics have included ‘Idlewild’s Rapture’ and ‘Race, Gender and Religion in Colonial Mexico,’ but for his most recent talk the topic had a special meaning.

One thing Hendershot has become known for at GRCC is the creation of different programs, including new classes and study abroad trips. For the four years before he spent the summer in India, Hendershot took a group of students to the Republic of Ireland and Northern Ireland to study all aspects of Irish history, including conflict resolution, the troubles and the peace process. The program is currently on hiatus for the foreseeable future, to allow time and resources for the creation of different avenues of learning.

“The program was very successful,” Hendershot said. “I am very proud of it.”

After securing one of 20 spots out of 170 applications for the National Endowment of the Humanities grant, Hendershot had the opportunity to spend most of the summer of 2013 in and around Delhi, India. Hendershot had taught about India many times but had never been.

“I’ve always been interested in Buddhism, Hinduism and world religion,” Hendershot said. “I finally got to study it firsthand.”

Upon returning to the states, Hendershot used his experience in the subcontinent when giving his lecture and got a nice surprise as a result.

“After the conference I was contacted by a Pakistani man,” Hendershot said. “He ended up inviting me to his house and I had chicken biryani with his family.”

Four years ago Hendershot created the History of Latin America course, but due to low enrollment, the class was cancelled. The class was brought back last year and Hendershot hopes to continue with it annually.

“(Latin America) is one of my favorite places,” Hendershot said. “It’s a relatively new couse and one that I’m very excited to teach.”

Since beginning work at GRCC Hendershot has created courses, travelled around the world, sometimes with GRCC students, and become a published author. His most recent publication is a chapter in a combined volume titled, “Family Spats,” on a topic that he says he has an “overarching interest” in, American and British foreign policy in the 20th century.

“As a World Historian, you are exposed to a lot of different information,” Hendershot said. “Some of it says, ‘Hey! Write about me!’”

Hendershot is the resident World Historian at GRCC, a teacher, a writer, and a lover of all things outdoors, but the one thing he is most passionate about is travelling. He has lived in Europe and visited several countries including Cambodia, Thailand and Mexico.

“History has been very good to me,” Hendershot said. “It’s taken me right around the world.”

Chickens Found In Car: Police Reports from April 15 through April 19