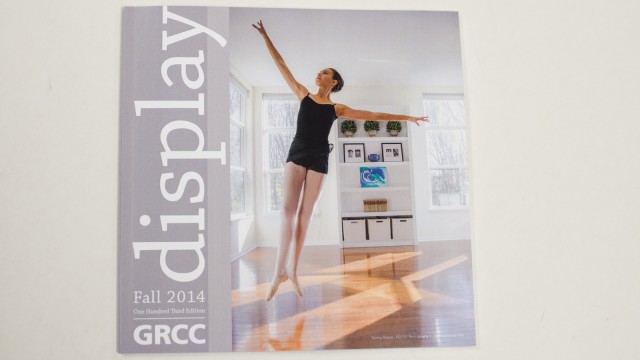 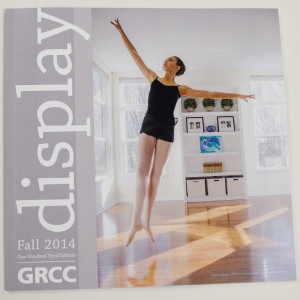 The current issue of Display magazine is now available. The issue marks the 50th anniversary of the publication and is the art and English departments’ celebration of the 100-year anniversary of Grand Rapids Community College.

The visual arts and writing publication comes out every semester and is made up entirely of GRCC student work. Works include short fiction, essays, poetry and one act plays in writing, and drawing, jewelry, painting, pottery and photography in the visual arts.

Charles Boswell, 31, an art major at GRCC, was chosen as one of the art section judges and enjoyed having the privilege of selecting the work of his peers for publication.

“It was nice looking at everybody’s work out in the halls and through all the different departments, especially the pottery and the sculpture,” Boswell said. “The hard part … (was) having to choose between different works based on certain qualities of completion and composition and color and all the different elements.”

Boswell and Nicole Wiersma, the other judge, did not have too many disagreements on what made the final cut.

“We collaborated well,” Boswell said. “We really had a good dialogue regarding all the different pieces and all the different merits. We didn’t really argue at all … We have similar styles and tastes. So I think we kind of worked well together in that respect.”

Lizbeth Lopez, 20, an art student at GRCC has two paintings in the new issue and one of them made the back cover.

“It’s obviously an honor because you don’t even know if you’ll be able to make it in the magazine itself,” Lopez said. “I’m happy that the school gives artists and writers the opportunity to be published, so to have an artwork chosen as a cover or back cover, that represents two departments, feels like a great accomplishment.”

Lopez says she is equally proud of both pieces, but had no expectations to get in the magazine, much less to make the cover.

“It was my first time painting with the medium and its inability to blend made it somewhat more difficult, but I’m glad I could use it to my advantage,” Lopez said. “I didn’t submit anything directly, but I was aware of the fact that there was a deadline to be met for the magazine. Once I turned it in, it got (in) the display case (on the fourth floor of the main building), so I knew it would be eligible.”

GRCC English professor and Display faculty adviser, Maryann Lesert, is proud of the work of the student editors and excited to announce a special issue in honor of the 100-year anniversary at GRCC.

“At the beginning of April we’re actually going to be putting out an issue that is a 100 issue celebration of Display,” Lesert said. “Its going to kind of be like the best of art and writing, at least exemplary work.”

This issue will be different, not only because of the fact that works from the past 50 years will be featured, but also because former faculty advisers have been enlisted go through the over 100 past issues.

“Walter Lockwood was a display adviser for many, many years,” Lesert said. “He selected what he considered the best of from the years he was an adviser. Also David Cope, who was the Display adviser prior to me (has been working on the 100-year issue). Other staff members in the English department have read and selected work as well.”

The deadline for submissions in the winter issue is March 13 and the 100-year issue is expected to be out in early April. Students interested in submitting work can go to grcc.edu/English/displaymagazine for more information.