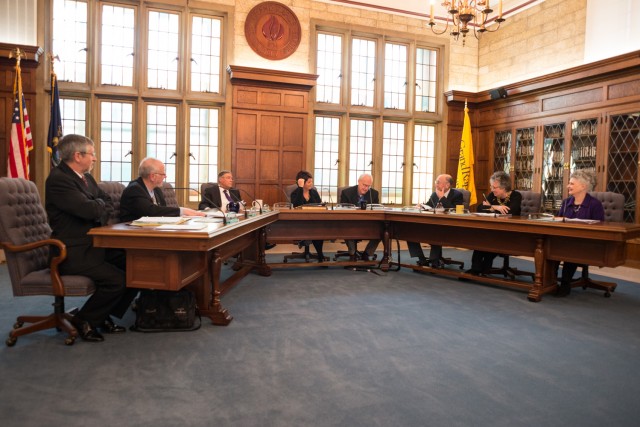 When Grand Rapids Community College Board of Trustees member Richard Ryskamp proposed a new policy at the most recent board meeting he was met with a great deal of criticism and resistance.

Usually when Ryskamp and members of the board disagree it has to do with issues of diversity, especially those that challenge his worldview.

This time the issue was his Respect for Law Executive Limitations Policy, a document that took Ryskamp almost two years to put together, which he explained as an extension of current board policy, requiring the president of the college to inform the board of illegal activity happening at the college and the steps being taken to correct the problem.

While the board raised many concerns with the policy, including redundancy, the main problem was the wording of the document. Trustee Deb Bailey noted that the policy made it sound like the president has the power to control whether or not illegal activity takes place and current GRCC president Steven Ender agreed with her.

When Ender suggested to trustee Ellen James that she ask for an amendment to the policy, it seemed like the problem had been solved. All that needed to happen was for Ryskamp to accept the amendment and rewrite one sentence.

Ryskamp flatly denied the request, saying the time to call for amendments was some point in the last two years, while he was working on the document.

After three quarters of an hour of discussion, clarification and passive-aggressive posturing on all sides, the policy was voted down.

According to Ryskamp, the fact that the policy was not voted in to place means that the board is allowing illegal activity to take place, as long as it does not pertain to the treatment of people. Following that logic any other type of illegal activity – tax fraud, public health, safety, sanitation – are approved by the board.

If he had agreed to reword the one sentence that other board members, and the president, felt was concerning the policy probably would have passed.

This was all precious time spent by the board, a board that only meets once a month to discuss matters important to the college. When time is spent on insignificant topics, it takes away from the mission of the board.

The Board of Trustees and administration at GRCC claim to put student interests above all else and this is true most of the time, but arguing over the legitimacy or redundancy of policies that do not affect students learning or experience at the college seem to counteract this statement.

The board should be discussing ways that they can become more involved in the campus community and how to get rid of the “high school with no friends” stigma attached to GRCC.

The board should become more involved with the students and not just receive monthly reports on what the administration thinks the students think and the students must be vocal about what they want.

There are plenty of activities on campus for students to get the most out of their time at GRCC. The board needs to find a way to engage the interest of students who seem to be growing more apathetic and the students have to want it for themselves, because if they don’t, there is nothing the board can do, short of throwing $100 bills off the roof of the Main Building to get students’ attention.