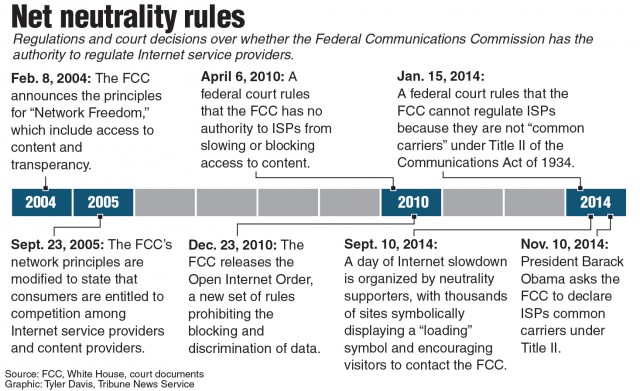 Federal Communication Commission Chairman Tom Wheeler plans to reclassify broadband providers as common carriers and forward the cause of net neutrality by establishing new federal rules for how internet service providers (ISPs) can shape traffic on its network.

The FCC is given the authority to classify communications companies under Title II of the Communications Act of 1934. Title II allows for the creation of common carriers, also known as public utilities. Currently, broadband providers like Comcast and Charter are not required to allow others’ traffic on its wires. AT&T was a company affected by this rule and Wheeler asserts that it was this reclassification that allowed the birth of the internet.

“The internet wouldn’t have emerged as it did, for instance, if the FCC hadn’t mandated open access for network equipment in the late 1960s. Before then, AT&T prohibited anyone from attaching non-AT&T equipment to the network,” Wheeler wrote in an opinion piece for Wired.

By making broadband providers common carriers, net neutrality proponents believe the openness that created competition in the telephone industry will repeat itself in the broadband industry. This announcement stopped short of “last-mile unbundling” that would open up the sort of true competition that would, for example, allow Charter to be able to provide broadband service on Comcast’s lines.

Hoping to preserve incentives for ISPs to invest in their networks, “there will be no rate regulation, no tariffs, no last-mile unbundling,” Wheeler wrote.

Yesterday’s announcement was more about ensuring that the internet remains free of backroom deals between corporations by providing government oversight and protection for both web services like Netflix and consumers.

In addition to making ISPs common carriers, Wheeler also announced rules that would further the cause of net neutrality.

“I am submitting to my colleagues the strongest open internet protections ever proposed by the FCC,” Wheeler wrote. “These enforceable, bright-line rules will ban paid prioritization, and the blocking and throttling of lawful content and services.” 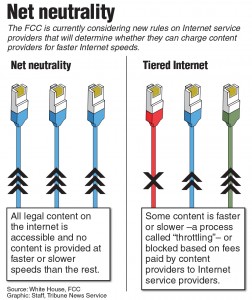 Net neutrality is the principal that all traffic on the internet should be allowed whatever speed it is capable of traveling on a given network. Because ISPs bear the cost of hosting internet traffic, they would prefer to charge more for certain high-usage service. Some providers are already putting caps on how much data their customers can use each month.

When discussing net neutrality, Netflix is often given as an example of high bandwidth usage. According to a 2014 report by network equipment vendor Sandvine, Netflix uses more than one-third of the total bandwidth of North America’s internet during primetime.

Paid prioritization is when one web service pays to give their content priority on an ISP’s network in order to discourage the use of its competitor. For example, if Hulu wanted to pay AT&T to give its service priority, AT&T would open up a fast lane for Hulu’s traffic. When congestion occurs, such as when everyone in a neighborhood is home watching videos on Netflix and Hulu, those users watching Hulu would be given priority and Netflix would buffer because there’s not enough bandwidth to go around.

Throttling is when an ISP intentionally slows down traffic to and from a particular web service. In 2013, Comcast users saw a sharp increase in the amount of buffering while watching videos on Netflix. Although this was technically not a case of throttling, but rather a more complicated way to slow down traffic, the result was the same. Comcast was intentionally slowing Netflix traffic in the hopes of getting paid by Netflix to allow the traffic through in the same way as all other traffic and how it had before Comcast decided to slow down Netflix. Eventually, Netflix paid Comcast to re-open the gates.

This is increasingly important as more original video content goes online first. Since the parent companies of many ISPs also own film studios and television stations, it would be a bit monopolistic to throttle competitors like Netflix and Amazon Video or give priority to video streaming sites it may have a financial stake in.

Some portions of net neutrality are already in place. According to Wheeler, if the FCC didn’t provide net neutrality protections, “your internet service provider doesn’t already charge you extra for running Skype or a virtual private network, or even a router.”

Net neutrality became part of the national conversation last June when John Oliver dissected the issue on his HBO series “Last Week Tonight.” During the segment, he urged his viewers to comment on an FCC public comments section on net neutrality. The video went viral. People flooded the message board, crashing FCC servers.

The FCC will vote on whether or not to implement the proposal Feb. 26. Congress weighs in on the topic the day before. If the proposal passes, ISPs will likely file suit and the battle will continue in the courts.