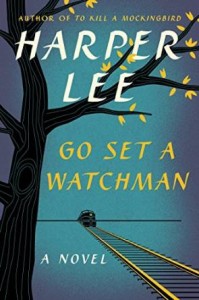 Best-selling author of “To Kill A Mockingbird” Harper Lee brings readers a unique literary experience with “Go Set a Watchman” (288 pages, $19.59), and surprises readers with the sequel to her award winning novel, set 20 years later. “Go Set A Watchman,” a historic literary event, is a newly discovered publication, found in late 2014, after Lee wrote it in the mid 1950’s.

Set in the mid-1950s during a time of political struggle, where the effects civil rights movement were taking root , 26-year-old Jean-Louise ‘Scout’ Finch returns home to Maycomb, Alabama, to visit her father Atticus Finch. Little does she know, Jean-Louise will encounter many personal struggles as she is faced with surfacing family secrets, and societal issues centered in the small town she grew up in.

As a reader, I was hesitant to pick up “Go Set a Watchman” mostly because I heard the word ‘sequel’ and did not see how Lee could build on such an iconic story. I could not have been more wrong. What captured me throughout Lee’s newest book was Jean-Louise, who was not only a huge focus on the story, but in some aspect, the political symbol of change. She struggled against the political status quo that occurred in her town, yet she sought out the chance to change it, and change the views of those around her, which is inspiring. I saw Jean-Louise as more than a character, and instead a sign of the world as it is today, in terms of civil rights.

Reading chapter to chapter, page by page, I enjoyed the difference in beginnings in each chapter as Lee introduced different characters. Each chapter presented the characters from a third person point of view, and gave readers knowledge and understanding.

I recall reading “To Kill a Mockingbird” many times throughout middle school and high school. It captivated me and it was something I enjoyed reading because of the political issues presented, while still entertaining me as a reader like many books do. “Go Set a Watchman” didn’t feel much like a sequel to me, but more like a spin-off. I am glad that the story was still centered around the Finch family, and readers can see the dynamic, good and bad, that occurs between everyone, and that Jean-Louise is so different from everyone else, drawing more attention to her than the other characters, besides Atticus Finch.

The characters in “Go Set a Watchman” are going to follow the central idea of what was happening in the political world, and because of this it seems that Atticus has lost his way, but I think that Jean-Louise being the symbol of change, culturally and politically as I mentioned, can help him find his way back to the man we remember from“To Kill a Mockingbird.”

“Go Set a Watchman” gets a thumbs up from me. . Readers should pick it up, give it a read, and start a discussion like so many have done since the release.