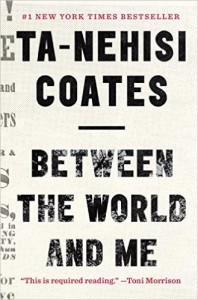 “This is your country, this is your world, this is your body, and you must find some way to live within the all of it.” -excerpt from “Between the World and Me.”

Powerful, moving, and thought provoking. These are just a few words that come to mind when reading Ta-Nehisi Coates’s book, “Between The World and Me” (163 pages, $16.80). Coates is a cultural and political writer for The Atlantic and is known for addressing large racial problems. His source of inspiration for this book was his 14 year old son, who broke down in tears when the officer who killed Michael Brown was not convicted. In the midst of such violent acts against the black community, this publication is what everyone should be reading if they haven’t already.

“Between the World and Me” is more than a memoir of a man, it is an eye-opening and heartbreaking publication that makes readers recall the history of our country and its people. It’s a criticism of not only the culture of our nation, but those in it. Coates explains through such intensity how the world is now, dominated by white supremacy as he warns his son of the world he will encounter.

From the beginning of this book, readers can feel the emotion behind his words, but know this isn’t just a book on feeling, it’s a book on facts and a true analysis of how the history of the African-American community is not much different from its future. From slavery, beatings and living without rights to gaining civil rights but being killed and beaten by police officers and other white individuals. What really digs and pulls on a reader’s heartstrings is the question, has anything really changed?

As a reader and an African-American woman I praise Coates for being such a powerful writer, and making readers reflect on the crime that has been occurring throughout the country lately. The violence has sparked much outrage, but Coates makes readers realize that the beginning of racial discrimination in the world didn’t start at the shot of a gun, it has been going on for centuries, it was a part of history. Unfortunately that history hasn’t changed, and it has become our present and future. More so than recent books I have read, I highly recommend reading this publication, and opening your eyes, and minds to the situation at hand. Maybe if enough people listened, a change could be made not just for Coates’s son and his future, but for future generations of African-Americans as well.