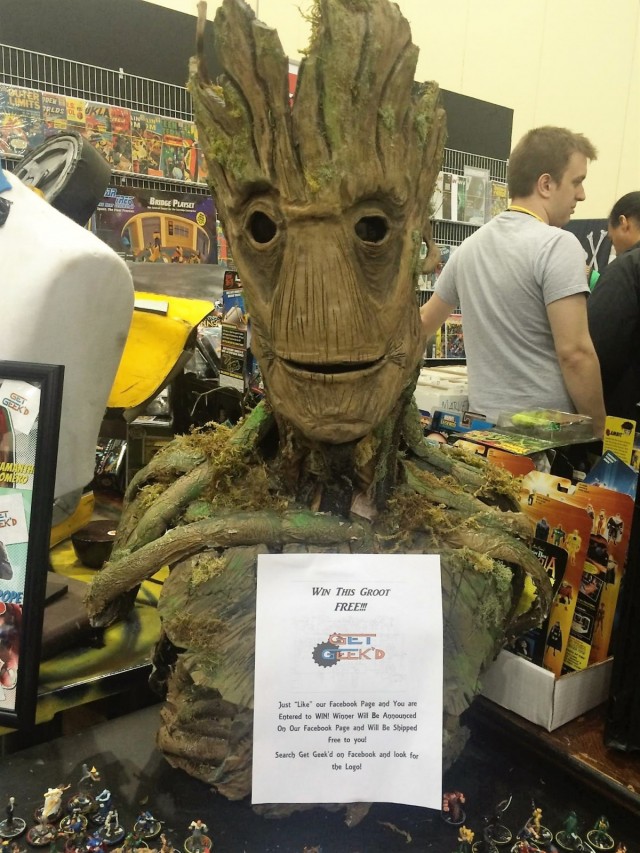 The third annual Grand Rapids Comic-Con kicked off its three-day event Friday when thousands of geeks and nerds of all stripes gathered at DeVos Place.

According to Grand Rapids Comic-Con organizers, it was a good turnout with two lines all the way down the main hall prior to the doors opening at 2 p.m. The vending hall was filled with many cosplayers dressed in Star Wars, Naruto, Doctor Who, and many more costumes.

Alex Westcot, a manager of one salon, was dressed as Groot from the popular science fiction movie Guardians of the Galaxy at the Get Geek’d booth.

“Groot is the big dumb muscle everybody loves, anything the kid loves I love, pretty much,” Westcot said. “I love the new venue. I think that the only issue people will complain about is parking, it’s always hard to find a good venue with lots of parking.”

Attendees can enter to win a life-size Groot bust by liking Get Geek’d on Facebook.

Vendor Terry Huddleston has been working on his digital art for the past 10 years.

“This Comic-Con is great, it’s close to home and has a really enthusiastic fan base, this is whipped into a kinetic energy that the fans bring with them almost like blood cells,” Huddleston said. “My job is a freelance artist. I do a lot of license work for companies that have licenses for DC, Hasbro, Nickelodeon, you name it. It’s living the dream I grew up drawing men in tights and now I get paid to draw men in tights.”

Huddleston is selling his digital artwork for $20, but if you’re wearing a costume he will sell it for $15.

11:30 a.m. – From Fantasy to Romance to Sci-Fi: Writing your Novel and Getting it Published featuring Susan Dennard (River Overlook 2)

11:30 a.m. – How to (Not) Draw Attention to Yourself by Really Trying featuring Robert Pope (Grand Gallery Overlook 1)

12:30 p.m. – The Life of Being A Bad Guy featuring Anthony Carrigan (Main Stage)