The Raiders fell 3-2, while the second game was postponed due to rain. GRCC was leading Aquinas 5-2 with two outs in the fifth inning. The game will be resumed the next time the two teams meet on April 28.

Coach Mike Cupples said it was many of the same problems reoccurring in the two games.

“We had a lead going into the sixth inning in the first game and just couldn’t hold on,” Cupples said. “It’s just more mental mistakes that we can’t have.”

The Raiders led 2-0 when Devin Husted scored a run on a wild pitch, but in the sixth inning after the Saints Nick Hepner scored on a wild pitch to tie it up, Patrick Giddings singled to score Todd Krowelski, putting Aquinas in front 3-2. That would be enough for the victory.

“We had a chance to really seal a nice win and we just didn’t get the job done,” Cupples said. “It’s just something else we can learn from.”

The Raiders trotted out a total of five pitchers. GRCC started Justin Palmbos who only went one inning giving up one hit with two strikeouts and no earned runs. Trevor Russo and Shane Odzark each followed with a scoreless inning of their own. Ean Walda pitched two innings, giving up no earned runs, allowing just one hit and one walk with a strikeout. Then Sam Traver came in and got the loss (1-2), giving up three runs on four hits, with one walk and three strikeouts.

Brendan Johnson went 1-for-3 with an RBI, while Jalen Cox went 1-for-4 with a run scored.

Aquinas’ Alex Hart got the win (1-0), giving up no earned runs and just one hit in one inning of work.

Giddings went 2-for-4 with the game winning RBI for Aquinas. Luke Epple went 1-for-3 with an RBI.

In the second game, the Raiders were one out away from playing a game that qualifies as a complete game with two outs in the bottom of the fifth when the umpire called the game due to lightning.

Jackson Shaver was in line for the win, but won’t get credit due to the delay. He pitched 4.2 innings giving up two earned runs on four hits and two walks.

In Game 2, Will Harris was 2-for-3 with a run scored and Dalton Phillips was a perfect 3-for-3 with an RBI.

Cupples believes his team is making progress, but just needs more time to get out and play.

“Being inside all the time is really hurting us when it comes game time,” Cupples said. “The more practice we get outside the better we will get.

“We will just keep pushing through and hopefully the wins will start falling our way.”

GRCC (2-13), is scheduled to play another doubleheader at 4 p.m. today, March 31, at Davenport University in Caledonia, Michigan. 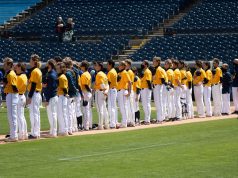 Raiders offense dominates, as pitching gets shutout in game two