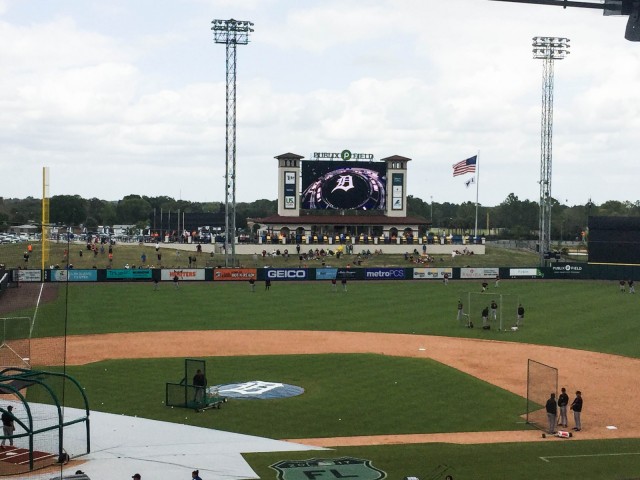 The 2015 season was one that Tigers’ fans longed to forget and when the 2016 season began, there was a sheer optimism that came from a few improvements in the bullpen, a boost in the rotation and adding a big bat. None of those “improvements” really came full circle, however and along with injuries, put a thorn in the side of Tigers’ Manager Brad Ausmus. The Tigers were forced to rely heavily on a veteran core of hitters and a young trio in the rotation. In that very recently ended 2016 campaign, the Tigers fell just a win shy of forcing an A.L. Wild Card tiebreaker and finished the season at 86-75, two and a half games behind a playoff berth.

Shortly after the season ended, Tigers’ General Manager Al Avila, according to Bless You Boys, told reporters at his end of the year press conference that “changes are coming,” noting that their usual spending ways could not continue, sending fans into a panic that a team rebuild was on the upcoming. Avila could not even rule out the likes of fan favorites’ Miguel Cabrera and Justin Verlander being involved in a trade. Many players’ contract security was up in the air with the ballclub, including the hot hitting commodity J.D. Martinez, who was deemed most likely to be traded. Earlier this year when he arrived in Lakeland, Tigers’ spring camp, he was “relieved” to embody the Olde English D for another go-round.

The feel in Tigers’ spring camp is one of a slight worry this season, as their spring record has been not-so-likeable at this point, as it sits today at 9-13, the sixth worst in Major League Baseball. The pitchers, specifically, have gathered a lot of criticism thus far, as veteran guys like Mike Pelfrey and Anibal Sanchez have pitched poorly.

The bullpen has been a constant struggle in the last six years and has often been blamed for early postseason exits, famously to Boston in 2013, when David Ortiz slammed his way into carrying the BoSox to another World Series Championship. The depth, in my opinion, seems to be the best it’s been in recent seasons, as there are more options in the minor leagues to choose from in case of big-league fallouts. Standout players were Ruben Alaniz and Sandy Baez, along with one of the Tigers’ most potent minor league prospects, Joe Jimenez.

The Tigers’ front office execs seem to be getting some heat from analysts due to their lackluster offseason moves. which resulted only in trading away their sparkplug centerfielder Cameron Maybin and signing backup catcher Alex Avila. Fans, however, are either relieved their favorites are still with the team, or, annoyed by the lack of effort to get a younger, faster team ready to go in a few years when the Tigers’ aging core is producing at a much lesser rate.

Positions to be filled

This year will be interesting. The Tigers’ performance may dictate where many of their players are playing at year’s end. If they’re performing poorly prior to the trade deadline, we may see a few guys whose contracts are ending (J.D. Martinez, Ian Kinsler, Francisco Rodriguez, etc.) being shipped away for young prospects. Part of the issue is the money tied up for existing contracts, giving little flexibility to retain their valuable “in prime” assets. Receiving a few prospects probably couldn’t hurt a Tigers’ team that was sixth highest in average age in 2016 (at 29.3) and has baseball’s 25th best ranked farm system (according to Baseball America), out of 30 teams. The team did not make many changes this offseason, in hopes that their veteran core would be able to give one final push before a rebuild goes into action.

Given that Cameron Maybin was traded this past offseason, there is a void left in centerfield that is likely to be filled by the likes of in-house candidates like Tyler Collins or Anthony Gose, or recently acquired center fielders like Mikie Mahtook or Juan Perez, or even one of the Tigers’ highest rated prospects, Jacoby Jones. While Collins is the most likely to make the club, Mahtook is also being talked about as the guy with the best chance of winning that starting spot. It is entirely possible these two will share the role, with whomever starting based on the matchup that day. Though that has become the most popular opinion, Jacoby Jones stood out. He has a natural feel for the centerfield position and is very athletic. Jones also hits with the most potency, as he has hit .304 thus far with one, very effortless looking, home run.

One reason the Tigers may be struggling right now is that many of their veteran players are representing their countries in this year’s World Baseball Classic. Miguel Cabrera and Victor Martinez, usually hitting at the heart of the Tigers’ lineup, are representing Venezuela while Ian Kinsler, the Tigers’ leadoff man, is playing for Team USA. There is no question Cabrera will produce this season, as Kinsler has also proved himself very consistent. Victor Martinez, however, is going into his age 38 season and has a track record of bad knees, which has significantly reduced his speed over the past few seasons. Martinez, however, has overcome the injuries in the past, while recently hitting .289 with 27 home runs in the 2016 season.

Jordan Zimmerman, signed to a five-year, $110 million deal prior to the 2016 season, was a huge disappointment after a strong start last season. He went down with two separate injuries and pitched to a 4.87 ERA after just 18 games started. He will be a huge question mark the Tigers hope to be answered positively right out of the gate, but understand his progress will be slow and hopefully he can rebound to where he began last season, being named the American League’s pitcher of the month in May before falling to injuries. He will be accompanied by the American League’s reigning Rookie of the Year, Michael Fulmer, in the rotation, who has looked strong so far this spring. Justin Verlander will ace the staff coming off a year in which he was the runner-up for the AL Cy Young award, pitching to a 3.04 ERA (second in AL) with 254 strikeouts (first in AL) and winning 16 games for the Tigers.

This season, if the Tigers can stay healthy, they should be pretty decent, if their pitching holds up. The Cleveland Indians, baseball’s 2016 World Series runner-ups, look potent as ever and land themselves in the same division as the Tigers. Winning the American League Central will be challenging, to say the least. However, the Tigers should be strong enough to finish second and compete for a wild card spot.

Below are my projections for the 2017 season: