On Monday, July 10, at approximately 6:15 p.m., a Grand Rapids Community College Police Officer was dispatched to elevator two of the Main Building for an elevator emergency.

A woman was stuck inside and suspected that she was near the first floor. The police officer arrived to the elevator at 6:17 p.m., and the display was flashing “1” and “0.5” but did not respond when the call button was pushed.

The police officer was able to communicate with the female stuck inside through the closed doors and found out that she was trying to get from the second ground floor to the third floor when the the elevator became stuck. The officer contacted dispatch and requested elevator services to come to the scene.

At 6:36 p.m., the first responding officer contacted another officer to contact the fire department because she started to feel dizzy. The officer was then advised to tell the female to re-contact dispatch from the emergency telephone from inside the elevator. She contacted dispatch and told them she did not need the fire department to respond because elevator services were responding.

As the officer walked up to the second floor, the technician advised the officer that the elevator had been reset and would open up on the first floor within a couple of minutes, this was at 7:33 p.m.

The officer returned to the first floor and made contact with the female who seemed a bit distressed.. The officer walked the female to her class and told the professor why she was more than 75 minutes late..

After the scene cleared the officer talked to dispatch and was told that the technician took the elevator out of service and would work on it the following day.

Police Reports From May 24 Through May 28 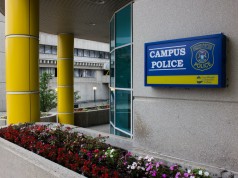