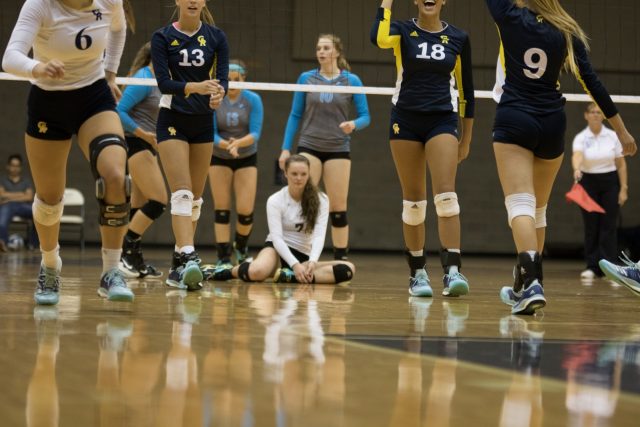 Ranked No. 4 in the National Junior College Athletic Association, the Raiders struggled in the first set. The Cougars’ energy during the set was significantly higher than that of the Raiders, but the Raiders won the hard fought set, 28-26.

“I thought Kalamazoo played really well,” head coach Chip Will said. “It was actually refreshing, we haven’t had that kind of pressure put onto us. I thought we handled it okay.”

Will’s squad entered the second set looking to force the issue and jumped out to a 9-4 lead before a Cougar’s timeout. The Raiders continued to dominate the second set, and seem to drain the energy of the Cougars and won the set by double digits, 25-10.

Even though their riding on a six-game winning streak, the player’s refuse to get complacent, they believe there’s always more room to improve.

“We did really well, but we still have a lot to work on in practice,” said Setter Autumn Severn. “We got to start off games more relaxed and comfortable.”

“They step their game up and challenged us tonight,” Outside Hitter Kendra DeJonge said. “But we were able to pick up our game and finish it out.”