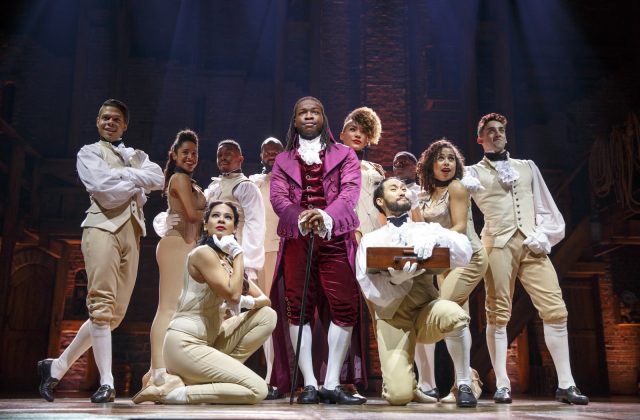 Tony Award winning and nominated Broadway productions have been announced to perform in Grand Rapids for the 2018-19 season.

Announced for the 2019-20 season comes a Broadway cult classic show, “Hamilton.” The 11-time Tony Award winning show will perform at the DeVos Hall, telling the story and legacy of founding father Alexander Hamilton. The show features a score that blends hip-hop, blues, jazz, rap and R&B. Broadway’s “Hamilton” is the story of America then, as told by America now.

“The Bodyguard” will be opening the 2018-19 season, performing March 6-11. The musical is based on Lawrence Kasdan’s Oscar-nominated Warner Bros. film and adapted by Academy Award winner Alexander Dinelaris, a screenwriter on “Birdman.” “The Bodyguard” premiered in London’s West End where it was nominated for four Laurence Olivier Awards including Best New Musical and won Best New Musical at the Whatsonstage Awards.

“The King & I” directed by Bartlett Sher will be making its way to Grand Rapids June 5-10. One of Rodgers & Hammerstein’s many works, “The King & I” performs a score that features classics as “Getting To Know You.” Set in 1860’s Bangkok, the musical tells the story of the unconventional and tempestuous relationship that develops between the King of Siam and Anna Leonowens, a British school teacher whom the modernist King, in an imperialistic world, brings to Siam to teach his many wives and children. The production won the 2015 Tony Award for Best Musical Revival.

“Finding Neverland” opens Oct. 9-14, the winner of Broadway.com’s Audience Choice Award for Best Musical. Directed by visionary Tony-winner, Diane Paulus, and based on the critically-acclaimed Academy Award winning film, “Finding Neverland” tells the incredible story behind one of the world’s most beloved characters: Peter Pan. Playwright J.M. Barrie struggles to find inspiration until he meets four young brothers and their beautiful widowed mother.

“Jersey Boys” will arrive in Grand Rapids from Nov. 30-Dec. 2, based on the behind the scene stories of Frankie Valli and the Four Seasons. They were just four guys from Jersey, until they sang their very first note. They had a sound nobody had ever heard. However, while their harmonies were perfect on stage, off stage it was a very different story—a story that made them an international sensation all over again. This musical showcases the inside the story of Frankie Valli and The Four Seasons in the Tony Award-winning musical.

“School of Rock” comes to Grand Rapids Jan. 8-13, 2019. Based on the cult film, this new adapted musical follows Dewey Finn, a wannabe rock star posing as a substitute teacher who turns a class of straight-A students into a fist bumping rock band. The new musical features 14 new songs from Andrew Lloyd Webber, all the original songs from the movie and musical theater’s first-ever kids rock band playing their instruments live on stage.

“On Your Feet” comes to Grand Rapids Feb. 19-24, 2019. Directed by two-time Tony Award winner, Jerry Mitchell (“Kinky Boots”), with choreography by Olivier Award winner Sergio Trujillo (“Jersey Boys”) and an original book by Academy Award winner Alexander Dinelaris (“Birdman”) takes the audience behind the music and inside the real story of this record-making and groundbreaking couple who, in the face of adversity, found a way to end up on their feet.

Coming back by popular demand is “The Book of Mormon.” Performing March 19-24, 2019, the musical comedy follows the misadventures of a mismatched pair of missionaries sent halfway across the world to spread the good word. “The Book of Mormon” is a nine-time Tony Award winning Best Musical.

April 30-May 5, 2019 welcomes “Waitress” into Grand Rapids. Inspired by Adrienne Shelly’s beloved film, “Waitress” tells the story of Jenna, a waitress and expert pie maker, who dreams of a way out of her small town and loveless marriage. Created by an  all-female creative team, this new musical features original music and lyrics by six-time Grammy nominee Sara Bareilles (“Brave,” “Love Song”).

The 2018-19 season will wrap up with the arrival of “Anastasia,” performing June 25-30, 2019. Inspired by the fan favorite films, and from the Tony Award-winning creators of Broadway’s “Ragtime,” this show transports the audience from the Russian Empire to the euphoria of Paris in the 1920s, as a brave young woman sets out to discover the mystery of her past.

While tickets are not on sale currently for Hamilton in 2019, Broadway GR recommends to guarantee seating to the fan favorite musical by renewing or purchasing a season subscription for the 2018-2019 season. For more information on ticket prices and season packages visit BroadwayGR.Com.

Chickens Found In Car: Police Reports from April 15 through April 19