At approximately 8:21 a.m. on May 25, a GRCC police officer saw a homeless woman, whom they recognized as having contact with before about trespassing, loading her personal belongings near the south end of Bostwick Commons. The woman then walked toward the Main Building and entered through the G-2 entrance. The officer followed the woman into the building and confronted her about her presence on campus. The woman informed the officer that she was given permission by another GRCC police officer to be on campus until 9 a.m., when the library opened. Her intention in the building was to use the restroom to shower.

The original officer looked up the woman’s information in the database and found she had three outstanding warrants for her arrest out of Ann Arbor, Michigan within a 50 mile radius. The officer gave the woman a final warning about trespassing and was advised to remain off campus.

At 1:10 p.m. on May 25, a GRCC police officer was dispatched to the south end of Bostwick Commons in the Main Building after a GRCC employee called regarding a suspicious person on campus. The employee who called GRCCPD informed the officers that while he was sitting at a table in the commons room, a white female was sitting at a nearby table and continuously looked at him while he sat at the table. After some time, the woman yelled at the employee and asked what he wanted and what he was doing. The employee left the area and entered the hallway to wait for the GRCCPD.

Once the officer arrived, they spoke with the unidentified woman to inquire about her business on campus. The woman was immediately upset by the officer’s need to speak to her, and directed some comments toward the employee who made the initial call to GRCCPD. The woman then explained to the officer on the scene that she was actively involved in a stalking case and asked the officer to contact the FBI to inquire about it. She explained that she was being stalked by a gang as well as on the internet. The officer looked up the woman’s information in the Michigan’s Law Enforcement Information Network (LEIN), but found no record.

The officer pressed the woman as to why she was on campus, and she stated she was there to see someone in the Information Technology (IT) department. The woman gave the officer the name of someone in the IT department, but would not elaborate on what her business was with that person. The officer determined the woman showed signs of mental instability, and informed her she could be on campus so long as she had business to conduct there.

On May 29, 2018 at 7:30 a.m., a GRCCPD officer was dispatched to the sixth level of the Bostwick Parking Ramp due to a broken window on the west stairwell door. The officer found the glass was shattered with an unknown object and believed the incident occurred over the Memorial Day holiday weekend, between May 25 and May 29.

A GRCC custodian reported the damage to the GRCC Facilities Department. The officer was informed by the facilities department that the window would be boarded until a replacement window was ordered and installed.

There were no witnesses or suspects. The estimated cost of repair, according to the police report, estimated to be $300.

Handrail damaged at entry steps to the Calkins Science Center

A GRCCPD officer was dispatched to the Calkins Science Center on May 29 at 9:02 a.m. due to a property damage complaint. Upon the officer’s arrival, the officer noticed the left side railing at the stairs that lead to the main entrance to the building was cut. The officer reviewed camera footage from the previous weekend to find when and how the incident occurred. The officer found a window washing crew was near the building during the weekend. The supervisor of the window crew informed the officer they used a large “boom” and the damage might have been from the large piece of equipment, but the officer determined the damage was a cut and not a break in a seam.

GRCC maintenance was informed of the damage and temporarily fixed the railing until a new one could be installed. The estimated cost of the repair is $100.

Graffiti found on pillar at the Cook Building

On May 30 at 7 a.m. a GRCCPD officer on foot patrol found graffiti damage on a pillar at the southwest entrance to the Cook Building. The graffiti painting was of a smiling bunny in boots in green spray paint. The officer contacted the Facilities Department who will seek a sandblasting contractor to remove the painting. The estimated cost of repair is $250.

While on mobile patrol on May 30 at 7:43 a.m., two GRCC police officers noticed a man sleeping in the parking structure of the College Park Plaza building. One of the officers made contact with the man and asked why he was sleeping there. The man responded that he was there to take a break, but he would be on his way. The officers asked the man for identification, but the man could not furnish any at the time. The man stated he lost his wallet and in it were his identifying documents. The man then gave the officers a name and a date of birth so the officers could clear him in the LEIN system.

After checking the name in the LEIN system, one of the officers noticed there was a wallet on the ground next to the man. The officer asked if that was his wallet. The man admitted the wallet was his and explained he lied about his lost wallet because he was not sure he was allowed to be in the parking structure. One of the officers asked the man for the identification inside the wallet and upon inspection found that the original name and date of birth the man had given did not match the one on the ID inside the wallet.

The man was given a verbal warning about trespassing and a citation for furnishing false information to a police officer where he was instructed to appear in court within 10 days.

On May 30 at 2:25 p.m., a GRCC police officer was contacted by a victim on the 400 block of Fulton St. The victim explained to the officer that while she was stopped at a light, a four-door sedan pulled up next to her and shot water into her car through her passenger side window, which was down. The victim took photos of the car and the men in the car and described the water guns used in the incident as “high-powered squirt guns.” The photos showed two black men in the car in their late teens or early 20s.

The GRCC police officer contacted the Grand Rapids Police Department to inform them of the situation.

Hit and run on sixth floor of Bostwick Parking Ramp

At approximately 9:18 a.m. on May 31, a GRCC police officer was dispatched to the sixth floor of the Bostwick Parking Ramp due to a property damage incident that involved a hit and run. A four-door red Subaru Forester was struck by a white Jeep Liberty in the parking structure.

Upon the officer’s arrival, the officer was informed a witness of the incident left a note for the owner of the Subaru. The witness left their name, phone number and a detailed description of the Jeep. The officer spoke to the witness on the phone who then described the accident. The witness stated the Jeep was attempting to park next to the Subaru but hit it as they were adjusting the car into the parking space. As a result, the Subaru was dented on the front passenger side. The driver of the Jeep then drove off to park elsewhere.

Man found trespassing on fourth floor of the Main Building

On May 31 at 9:05 a.m. a GRCC officer was approached by a GRCC employee while on foot patrol regarding a man sleeping under a table by the photo lab on the fourth floor. The officer spoke to the man about his business on campus. The man stated he was a student and was sleeping there for the moment. The officer asked for the man’s identification, but the man stated he had recently lost his wallet. The man verbally identified himself and said he recently moved to Michigan from Florida. The officer checked the GRCC student database to confirm the man was a GRCC student, but did not find him registered for summer or fall classes. The man informed the officer that he had not registered for classes yet, but would be a student in the fall.

The officer gave a verbal warning to the man and advised he stay off campus until he is a student and has classes at GRCC.

June and July police reports were not immediately made available by the police department. 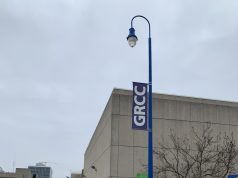