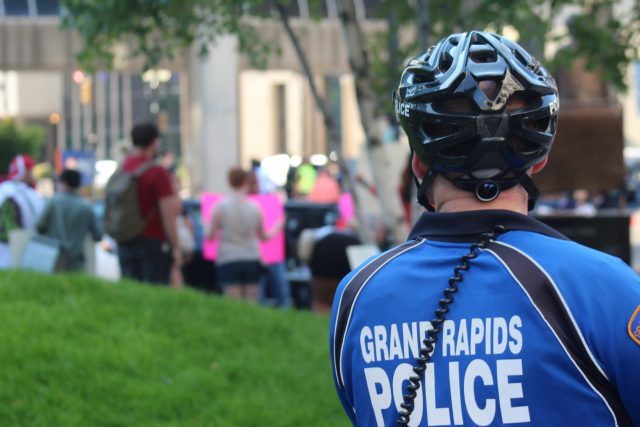 The rally attracted local protesters, including individuals representing Planned Parenthood and Nextgen Michigan. Many of the protestors’ signs displayed similar concerns about Pence’s plans to defund organizations such as Planned Parenthood, and proactively defended a woman’s right to an abortion; as the rally organizers handed out pink vests that read “Pro-Choice.”

“We don’t really care that much for Mike Pence. So Nextgen Michigan and Planned Parenthood put together a last-minute protest just to make it clear that his values are not our values,” said local protestor Elena Gormley. “I think it’s really important to make it clear that not everyone in West Michigan has Mike Pence’s values. I also think it’s really important to be a little inconvenient to the people who support him.”

Pence’s arrival in Grand Rapids was also met with support and a counter-protest. Standing across Rosa Parks Circle was a giant banner reading “Abortion is Murder.” The sign drew attention from the protestors, as a small pro-choice group stood in front of the banner. This attracted attention from the Grand Rapids police but the protesters were ultimately allowed to stay in place. The pro-choice group was recorded on a small video camera carried by the sign’s owner as he preached verses from the Bible.

Editor’s Note: This story was updated on Tuesday, April 9 at 9:22 p.m. to correct a statement involving the message of the pink vests.