The iPhone 11 series will be the most affordable iPhone at its launch. The iPhone XS started at $999 at launch and the XS Max was $1,099, while the iPhone 11 starts at $699 and the Pro starts at $999. If you’re purchasing through Apple, the iPhone 11 will be starting at $16.62 a month or $399 with a trade-in whereas the Pro will be $24.95 a month or $599 with a trade-in. Many companies are already offering pre-orders and trade-in values for customers who have previously owned iPhones.

With these new phones, there are also new colors. The 11 comes in two new shades, purple and mint-green, and the Pro comes in a new army-green color.

Included in this launch will also be the new Apple Watch, the series 5. The watch will have a compass and an electrical heart sensor, as well as a higher cellular capacity in comparison to previous generations. Apple is partnering with Nike and Hermès, allowing customers to create their own style.

The main difference between the two models are the cameras, which is sparking some controversy. The regular 11 has two cameras, which is something previously done in the XS Max. However, the Pro features a new three-camera system, and there are some mixed feelings about this.

“I think the new design is ugly,” said Naomi Zarco, a 20 year-old student from Grand Rapids. “They could’ve installed one camera that does the job of all three.”

Some people are more willing to make the switch from Apple to Samsung due to the camera change. “I’d rather get a Samsung,” said Zarco. “I would switch to Android just because of that, some cameras on the Samsungs do the same and it’s all-n-one.”

However, another student, who works for Apple and would like to stay anonymous due to that, had another thing to say about the cameras. “At first I thought it was funny because they were just trying to add cameras,” she said. However, “it does make it easier for photographers to get into photography, who can’t afford an expensive camera.”

Both of the new iPhones will shoot in 4k resolution at 60 frames per second, with the 11 having a wide and ultra-wide lens. The Pro has an additional camera, which is a telephoto lens. There’s also a new mode for low light situations, night mode shooting, making it easier to take photos in dim lighting.

For additional information and a detailed list of the specs of Apple’s new devices you can go to Apple’s website here. 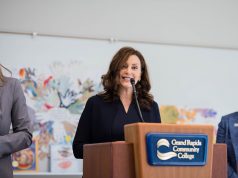