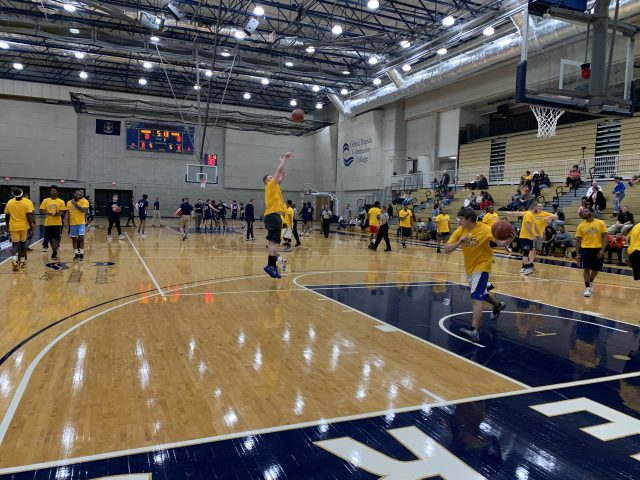 It’s homecoming week here at Grand Rapids Community College and as a part of it GRCC Men’s and Women’s basketball teams had alumni games, October 23rd, at the Ford Fieldhouse.

The women’s team beat the alumni team 76-66 and the men lost to the alumni 79-76. Both of the games were physical affairs with lots of fouls and high energy. The benches were incredibly involved giving their full support to those on the court at the time.

Before the game some of the players were given a tour of the new facilities and chance to see how the program has changed since they were GRCC students.

“It was a good experience coming back and playing here after two years” said Anthony McIntosh, a former GRCC basketball player on the 2017-2018 team. “Coming back getting a W, I liked it. I liked everything about what happened today.”

“We did some good things,”

Women’s Head Coach Dave Glazier said. “We still have a good number of things I want to work on… Overall our kids played hard. ”It’s just cleaning the little things. I expect us to do better in a game like this.”

Men’s Head Coach Jeff Bauer said he appreciated the efforts of the alumni athletes, but would have like to see his team do more.

“First of all, thank you to the alumni for coming out,” Bauer said. ”We had some skilled guys out here, some big strong lumberjacks, so I appreciate Coach Bronkema and Coach Selma for doing that for us… We didn’t play great. They were a big, strong group and I don’t think we responded well to that.”