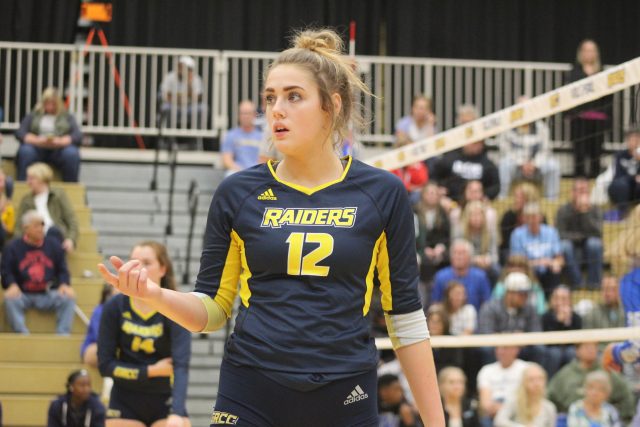 Grand Rapids Community College had an exciting night for volleyball on Oct. 24, with the homecoming alumni game followed by a match between GRCC’s current team vs. Jackson College. The alumni played three matches blue vs. gold, although the scores were nail bitingly close throughout the matches gold took the win for all three.

Alumni from years 2007 and 2008 Alyssa Perry, of Kalamazoo, and Elise Weber, of Ann Arbor, were glad to be back and play for old time’s sake. When asked how it felt to be back, Perry said, “I don’t know, reminiscing old days is always fun.”

To Weber, not much had changed.

“Walking through the doors felt the same,” she said.

Around 6 p.m. the homecoming festivities began in the gym, including several giveaway booths with all things GRCC including cups, shirts, maganents, bags and more. Many tables were also set up with delicious food for fans and staff. During every timeout and transitions between the matches GRCC student athletes launched t-shirts into the stands.

Between the crowd and players the energy in the gym was extremely high. The Raiders grounded the Jets in all three matches. Final match scores were 25-16, 25-15 and 25- 17 ,with a total of 50 kills throughout the matches the Raiders were unstoppable.

“Great crowd,” he said. ”It was fun to have every organization on campus really chip in, ya know, and really kind of be a part of homecoming. I think it was a really good school-wide win.”