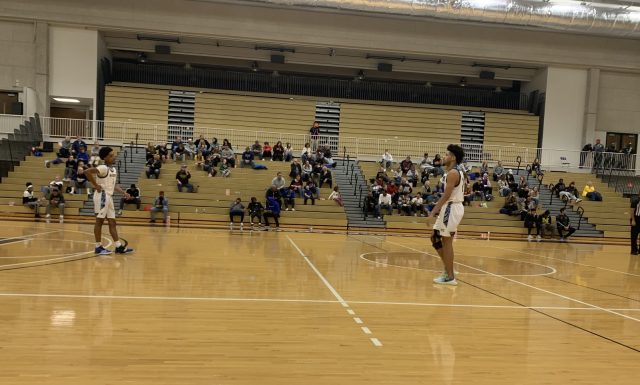 On Friday, Nov. 15, the Grand Rapids Community College men’s basketball team made quick work of the Aquinas JV team, beating them with a score of 84-50.

The Raiders jumped out to an electric start right from the opening tip, draining three after three to take a 21-5 lead early in the game. This early run, sparked by a massive dunk by sophomore Johnny Davis off of a lob from freshman Peyton Vis, gave the team a lead huge lead that they didn’t come close to losing.

With the score at the end of the first half being 48-13, the writing was on the wall early.

The Raiders had a balanced night in terms of scoring, with four players ending the night with double-digit points.

The team was led in scoring by freshman Chandler Collins, who shot an impressive 66% on nine shots. He also finished the game second on the team in rebounds with eight.

Freshman Montrayl Simpson led the team on the defensive end, finishing the game with four blocks and two steals.

This was right in line with what the team was looking to do heading into this game, according to Coach Jeff Bauer.

When asked what inspired his team to come out early in the game, the coach praised their defense, “We’ve been preaching defense here, especially our big guys… the big focus, and what I’m really proud of, is how we defended”.

This win moves the Raiders to 3-0 on the season.

Despite being undefeated so far in the year, Bauer has high expectations for his team moving forward. When asked where he is looking for his team to improve in the season, he quickly responded: “we’ve got to improve at everything”.

With a lot of games left in the season, the Raiders are looking to stretch this win streak out for as long as they can by staying hungry and improving on both sides of the ball as a team.

GRCC’s next game is at home against Hope College. It is on Nov. 20 at the Ford Fieldhouse, and it starts at 7:30.

GRCC Men back on track after dominant win