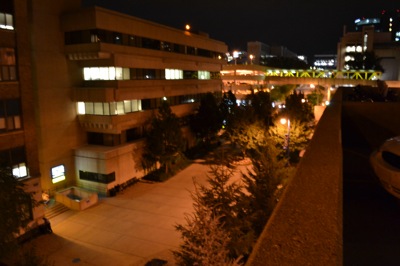 GRCC’s Cook Hall, which houses dental, radiographic technology, nursing, business, and English classes, will be getting an overhaul during the summer of 2012.

“We had two objectives when we started this program – to raise money and to increase awareness and attention,” he said. “We want to grow and expand to serve our community and the increasing numbers of enrolling students.”

While the acquisition of Davenport’s campus, which cost $12.5 million, helped with the increasing amount of students, the remodel of Cook Hall is mainly to upgrade the healthcare training facilities and provide a completely different learning environment for students.

According to Bowne, the main idea behind the construction is to “gut it and start over,” in order to move things around more easily.

Dr. James Buzzita, who is Chairperson of the “GRCC Works…” Campaign, as well as GRCC alum and the founder of MMPC medical group, saw the current dental, radiographic, and nursing classrooms and told staff that it was important to update all of the lab equipment to be state of the art. Bowne agreed.

“We want to create a learning environment that approximates the work environment,” he said. “The facilities should be for healthcare professionals.”

The Foundation also wants to create an environment that is more conducive to different learning styles, and that will make the students and staff more comfortable.

“We want to create the right type of learning space for students,” he said. “We want a formal lab and classrooms, but also a comfortable gathering space.”

The space provided will allow students a place to go between classes, or meet with teachers to discuss assignments or problems without necessarily having to go to an office. There will also be lounge areas available for staff only.

The Foundation did research as to what type of environment would be better for students and teachers, and wound up with what is now the first floor of Cook Hall. The other four floors will be similar to the first, Bowne said.

“The other floors are (currently) not good student learning space or traffic space,” he said.
The renovation will likely take two summers to finish, and will not be worked on during the fall or winter semesters.

Any summer classes that would normally be taken in Cook Hall will be moved elsewhere.
“We will fully utilize the campus,” Bowne said. “Creatively, we may have to work off-campus.”

The last time the on-campus dental lab was renovated, students were moved to the dental labs at Ferris.

In order to raise money for the Cook Hall renovation, the GRCC Foundation submitted a Capital Appropriations Request to the State of Michigan, knowing that the state would be likely to support the upgrading of healthcare facilities, and received $5 million this past December to put towards the $10 million total cost.

Another $18,000 was donated by the Student Congress, and the Foundation was able to find a donor to match this, making it $36,000.

Other donations for the program came from past donors, people with a relationship with the school, and people with an interest in what GRCC does, according to Bowne.

GRCC is currently second in the nation per capita as far as gifts go, he added.

“The big gifts come from a belief in the institution,” he said.

“Donors also always look to the president as well when deciding to donate.”

“Dr. Ender has been well-received by the community. He’s an educator and a businessman, and from a community standpoint, that’s wonderful,” he added.

Dr. Olivarez, the previous president of GRCC, also helped lay a foundation and get people interested in donating to the school, Bowne said.

“Donors paid attention then, and showed an interest in donating before this program even began.”

GRCC will be putting $14 million into the entire project, and the Foundation has currently raised about $12 million that will go towards the renovations needed.

A little over $1 million more will go to other college needs.

The goal is comfort, according to Bowne. If the students are comfortable, they will be better equipped to learn.