The GRCC Raiders improved their record to 14-7 (9-2 MCCAA-W) with a lopsided 88-59 victory over conference opponent, Kellogg Community College.

Jared Mysliwiec lead the way in scoring for the Raiders with 15 points, but the Raiders displayed team play throughout the first half.

It started early on the defensive end, where ball pressure led the Raiders defensive attack.

The pressure led to early turnovers by the Bruins and easy fast-break points for the Raiders. The combination of ball movement, easy shot opportunities and made free throws helped give the Raiders an early double-digit lead.

Perimeter play led by T.J. McCutcheon and Jimmy Carroll Jr. helped start the Raiders transition attack. Roy Jackson led the team near the end of the first half as the Raiders took a 31-15 lead with six minutes left in the half. 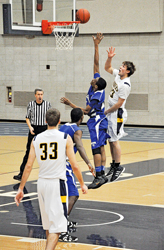 The Bruins of Kellogg Community College continued to play tough perimeter defense and battle past their early shooting struggles.

The Bruins were able to narrow the deficit to single digits until Grant Tracy nailed a three pointer on the wing right before half time, giving the Raiders a 42-31 lead heading into the locker room.

The second half saw much of the same from the Raiders as it only took nine minutes of play before head coach TJ Carnegie pulled all his starters and let his bench finish up after building a 30 point lead.

Micah Gates and Arik Hesselink led the way inside for the Raiders, with a combined 25 points and 20 rebounds in only 30 minutes of play.

The Bruins, led by Chris Stevenson and Steve Roper with 17 points each, continued to struggle offensively in the second half.

GRCC will travel to Glen Oaks and then Muskegon Community College on Wednesday and Friday before returning home to play Ancilla College the following Wednesday, Feb. 22.