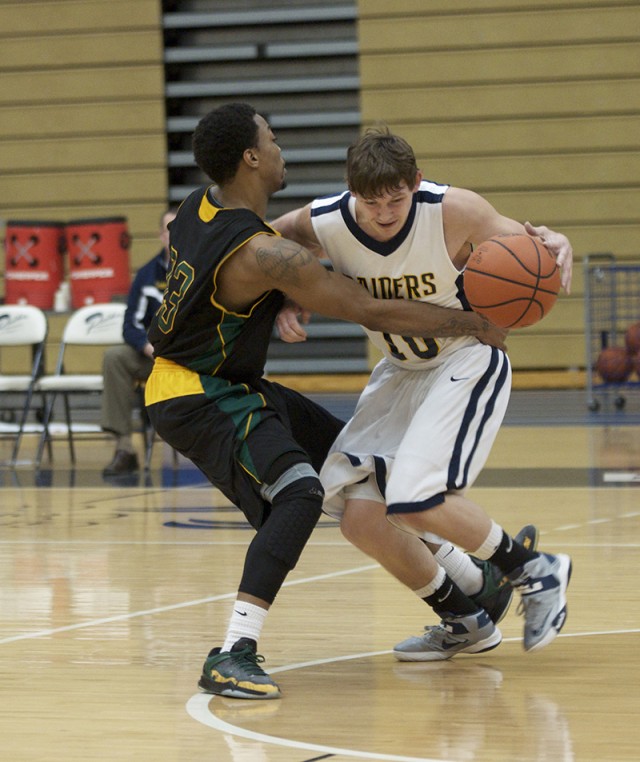 The Raiders men’s basketball team defeated No. 9 ranked Glen Oaks Community College to win the NJCAA District 9 Tournament Championship 78-73 Saturday evening at Delta College. With this win, the Raiders advanced to the National Tournament and extended their winning streak to 10 games.

Freshman forward Deontae Hudson was named tournament MVP after averaging 18 points and 8 rebounds per game during the tournament. Freshman guard Miles Robinson averaged 16 points per game and was named to the All-Tournament Team. Head Coach T.J. Carnegie was named Coach of the Year in District 9.

The Raiders started their postseason run by defeating Lake Michigan Community College March 5, 69-51 in the first round of the tournament.

“Everyone contributed. It was a very balanced attack,” Carnegie said.

In the semifinals, the Raiders outlasted No. 2 ranked Lansing Community College 71-61, in which the Raiders led the entire game. Freshman guard Kevin Badger and Hudson both had double-doubles. Badger scored 16 points, grabbed 12 rebounds and dished out 6 assists. Hudson added 14 points and 10 rebounds.

“I was proud of our guys. They battled hard,” Carnegie said.

The Raiders knocked off Glen Oaks one day after beating Lansing. They were able to overcome fatigue and pulled out three wins in five days on their way to the Conference Championship.

Hudson scored a team high 24 points and pulled down 10 rebounds. Robinson added a solid 20 points and freshman forward Alex Mustert tallied a double-double with 11 points and 11 rebounds. Badger led the team in assists with 10.

Glen Oaks lead the Raiders at halftime 33-30. The Raiders traded baskets with Glen Oaks throughout the second half. They led by as many as seven down the stretch, but Glen Oaks battled back, regaining the lead by two in the final minutes.

The Raiders stormed back to take the lead at 76-73 with two seconds left to play. Forward Deontae Hudson nailed two free throws to extend the Raiders lead to 78-73 with 1.7 seconds left.

“I’m extremely proud of these guys,” Carnegie said. “I don’t think six weeks ago we would have won a game like this. There were times in the game where we could have given up, but they didn’t, and I couldn’t be more proud. It was a total team effort. Everybody played well and we really had to grind it out, and the guys found a way to do it.”

The Raiders improved their record to 21-8 as they survived the District 9 Tournament and now have their eyes set on the National Tournament. The tournament will be held in Danville, Illinois.

“We have to have a good week of practice, and we have to heal our bodies,” Carnegie said. “The guys have really come together as a team and have embraced the team concept.”

The Raiders will now attempt to win their first national championship in basketball.

“We just want to focus on our first game and focus on winning that one,” Carnegie said. “Once you get your ticket punched, anything is possible”.