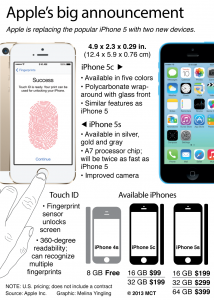 After months of speculation, Apple finally released two new versions of the iPhone on Sept. 20, the iPhone 5C and iPhone 5S. In a break from tradition, these devices replace the year-old iPhone 5, which is being discontinued in favor of selling off its remaining supply of the smaller, two year-old, iPhone 4S.

The iPhone 5C is a drastically different device than what most Apple fans are used to. Besides your choice of candy-colored exterior, it is the first device to feature a plastic body construction since the iPhone 3G was released in 2008. Because of this and other design choices, the iPhone 5C is priced starting at $99 with a contract.

The iPhone 5S is the slightly upgraded version that we have come to expect in odd-numbered years from the Cupertino, Calif. based industry giant. It features the same design as the iPhone 5, including its metal case.

This year’s innovation is the addition of Touch ID, the fingerprint recognition system that uses the home button for various authentication activities, such as unlocking the device or authorizing an App Store purchase.

In the wake of the news that the federal government is collecting data, privacy concerns were raised about Touch ID. It didn’t take long for the popular link-sharing site Reddit to joke, “Apple introduced fingerprint scanning—world’s largest name-to-fingerprint database now available without even trying.”

An Apple spokesperson ensured the Wall Street Journal that the scanner doesn’t store images of users’ fingerprints on the device. Instead, Touch ID stores only “fingerprint data,” which is encrypted within the iPhone’s processor. In addition, Apple is not allowing third-party apps access to the scanner.