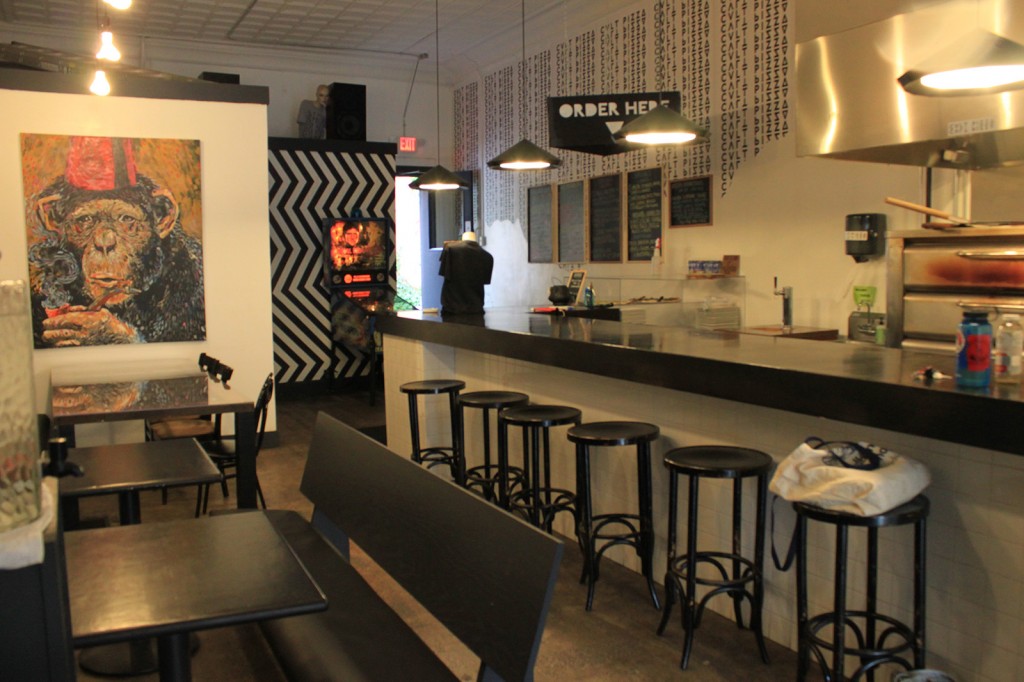 After two weeks of construction, farm-to-table restaurant Cult Pizza reopened its doors earlier this month to show off a brand new kitchen and significant menu change- local meats. The owner of the former vegan pizzeria may have changed the menu, but his mission to provide affordable yet sustainable, organic meals to Grand Rapidians of every class remains the same.

If you haven’t heard of Cult Pizza (or the edgier CVLT ), plan a visit to 10 Jefferson Ave. Right next door to the vegan Bartertown Diner, the pizzeria was aptly named as it has gained quite a cult following. Ryan Cappelletti, owner of Cult and founder of Bartertown Diner, has been making what he calls a “neighborhood” out of the little street since he opened Bartertown in 2010.

Since then he has passed on the ownership of the diner to five of his former employees, demonstrating his mission of equal worker-focused and operated ownership.

In April 2013, Cappelletti broadened his reach and decided to challenge the status quo with the opening of Cult. Teamed up with a dedicated crew, local artists Tom Jenkins and Charles State, graphic designer Dylan Gunnet, and a group of local farms such as Ham Family, Green Wagon, Mud Lake, and Uptown Farms, Cappelletti set off to create Grand Rapids’ first farm-to-table vegan pizzeria.

It didn’t take long for Cult to find its niche by providing a unique dining environment and a plethora of vegetarian options. However, changes needed to be made to the young business so the restaurant closed its doors for two weeks. After much collaborative decision making, the addition of local meats to the menu, and the construction of a larger kitchen, Cult has been given a fresh start.

“We’re looking at it like It’s our first time opening, as if before was a practice run,” said Cappelletti. “Now we feel like we’re really open.”

Besides the arcade, eccentric local art, and delicious pizzas such as the Summer Pie and The Annihilater, what makes Cult so different?

Cappelletti pointed out that there are 194 pizza joints in Grand Rapids. How do you open a pizzeria distinctive enough to not just become the 195th? Part of Cult’s success can be found in the unique vision that Cappelletti and the staff share. “Cult is not for profit’s sake,” he said. “There are better ways to make money, but this business is about being sustainable. This restaurant is a project; it was set out to create a change. We’re trying to open people’s minds through food.”

Cult is different because it focuses on ensuring sustainability and quality, but also affordability and accessibility. If there’s any reason to shy away from replacing the Big Mac with a more nutritious organic meal, it’s the price, especially for college students. However, Cappelletti’s focus on customers over profit has ensured that prices (around $8-$14 per pie) stay in a range that almost everyone can afford.  Cult’s mission is to not only provide their ingredients from ethical, trusted local farms, but to also ensure that it’s not a commodity food.

“We wanted it so that anyone from a college student to the middle class can afford it. Cult is for everybody in that sense, “ Cappelletti said.

Cult is open 4-10 p.m., seven days a week, with delivery until 9:45 p.m. You can find their daily specials and updates on their Facebook page, while their menu is on www.cultpizza.com.