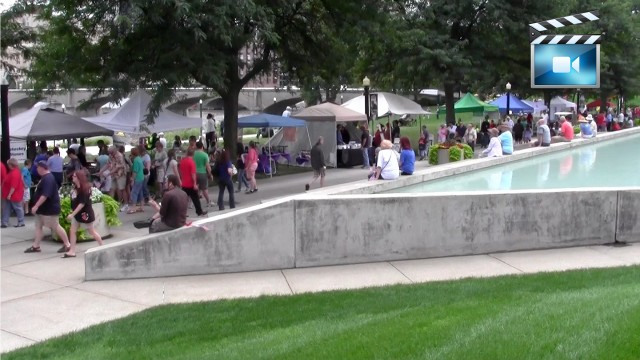 Dozens of local artists and crafters were selling their work to Labor Fest crowds and representatives from labor unions and political organizations were educating the public and handing out information in their booths. Classic cars and motorcycles were shown off if the Gerald R. Ford Presidential Museum parking lot as part of the “American Made” Car and Motorcycle show.

Grand Rapids Firefighters were also at Labor Fest with the Grand Valley Fire Safety House teaching children about fire safety and what to do in the event of a fire. Children were also able to participate in face paintings, dozens of games including a penny throwing contest and also hitch a ride on the mini ferris wheel.

Labor Fest replaced the traditional Labor Day parade in Downtown Grand Rapids due to the economy in 2009. “The committee wanted to offer something that was a community event that everyone could come down to and offer a free afternoon for the whole family.” says Lisa Radeck, the Arts and Crafts Coordinator for the Labor Fest Committee.

Organizers have been planning since January and look forward to planning next years event. “We’d like to get more of the area labor unions involved, including the teachers union.” Radeck said. “We really want to focus on getting more labor booths here to educate the public (about) what they do.”