For one dazzling evening, catchy techno music pounded from the walls of the campus cafeteria as west Michigan’s finest and brightest artists lit up the stage in high heels and outfits extraordinaire. 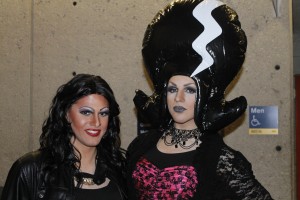 The event was the third of its kind for GRCC’s gay-straight alliance group StandOUT. The LGBT activist group seeks to “educate, advocate and entertain” GRCC students and the public on LGBT rights.

Apart from providing a fun evening of entertainment, Eirann Betka, president of StandOUT, said the show was “a way to present to our college and community a lot of really unique and talented people” through different showcases. “We just wanted to bring a different spin to the usual student activities.”

Among the performers for the evening was the Collegiate’s very own Clayton Cummins. Cummins is writing a first-person article about what it’s like to do drag. Through his experience, he hopes to change the way the public looks at drag.

“You know, I think we project a lot of stereotypes about what drag actually is. I personally see it as art,” he commented, adding, “You don’t know how much work these ladies have put into what they do.”

Alex Beecroft, treasurer for StandOUT, also hopes to see change on a local level. “It’s important to me to be a part of something that I feel is creating a space in our community where everyone is safe, and for me, that’s what StandOUT is. Everything we do is about having fun, uplifting one another, and making sure there’s a safe and secure place for everybody.”

Controversial in nature due to the characteristically risqué appearances of performers, many in the public realm fail to understand the reason behind drag. “It’s all about the expression of self,” notes Beecroft.

Donations raised from the show will help fund the group’s trip to the annual Midwest Bisexual Lesbian Gay Transgender Ally College Conference. MBLGTACC is the “largest regional LGBT college conference in North America” and is aimed toward strengthening gay-straight alliances in colleges through workshops and motivational speakers.

Last year’s conference, held in Lansing, was “the first pinnacle moment of getting our group off the ground and running,” said Betka. Since the conference, Betka has noticed an increase in new members, noting that StandOUT is now “one of the most heavily attended organizations on campus.”

The climbing success of this group comes at a time when gay rights are at the forefront of activism in the United States. It comes as no surprise, then, that an increased alliance movement on GRCC’s campus mirrors recent events in national coverage. Recent polling shows that a majority of Americans supports the legalization of gay marriage, and increasing numbers of people view non-hetero sexual orientation as socially acceptable. 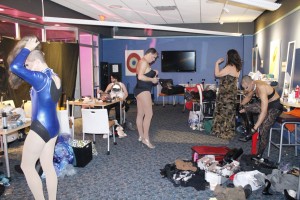 Despite swift changes in public outlook over the past decade or so, there are still those who would become upset at the sight of men dressing as women and women dressing as men. To those people, Grand Rapids’ local drag artists would ask for a little more understanding. “(They shouldn’t be) so quick to judge us for what we do, cause they don’t really know what we do,” said Karloz Michaels, one of the kings who performed on Friday evening.
“It’s all about having fun,” added fellow performer and Michaels’ long-time friend, J. Breezy.

For students who may be struggling to find acceptance in their sexual identity, or know someone who is, Beecroft would like to send an open invitation. “To the students at CC who might be in the closet, or those who might be afraid, even if they’re not gay, to speak up for people who are… (I want them) to know that they’re in a place where they’ll be supported, and they don’t have to be afraid.”

StandOUT meets every Monday at 1 p.m. in room 020 the Student Life Center and every Wednesday at 12 p.m. in the Diversity Center.