Some ArtPrize entries are as much about the story of how it was made and where it has been as the artwork itself. Gon KiRin, the fire breathing dragon that has been parked outside The BOB for the duration of ArtPrize, has an extensive history. 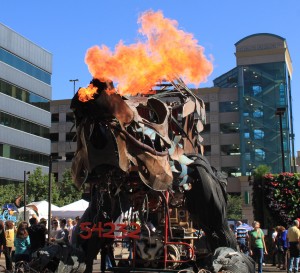 Ryan Doyle, from Detroit, is one of the artists that started work on Gon KiRin in 2009. Other than creating interactive art, he speaks at high schools, and most recently at the Detroit Institute of Arts Save The Art protests, where they are trying to save valuable artwork that Detroit may sell to pay for the city’s bankruptcy.

“We went down to the DIA and burned a sign that said ‘Save the Art’ to try and get people’s attention,” Doyle said, of Gon KiRin’s appearance in Detroit before ArtPrize.

Built on the frame of a Dodge W300, Gon KiRin(which is Mandarin for ‘Light Dragon’) was created to symbolize the awakening of the ‘Sleeping Dragon’ of China’s economy.

“The economy was failing and most of our scrap is going to China to be remanufactured into goods that we buy back,” Doyle said.

Almost the entire dragon is built of repurposed material found around Detroit and parts of California. Tires that make up the arms were found on the freeway around Detroit, concrete forms from Oakland were cut and bent into spines, propane tanks from Los Angeles were added and couches found on Detroit roads were added for seating. A keg is used as a hydraulic reservoir.

Since it’s completion in 2011, Gon KiRin has been to ArtPrize in Grand Rapids, the Makers Faire in New York, Save the Art and Hold the Fort in Detroit, and Burning Man in Nevada.

“It was great to get all the kids on this one,” said Doyle. He likes to create interactive art and get people involved.

While Gon KiRin will most likely leave Grand Rapids on a flatbed trailer, it is self-propelled and has reached speeds of 50 mph. The flame breath of the dragon went through as much as 250 gallons of propane a week while it was in Grand Rapids, and that’s with strict limits set by the city.

“They allowed us to show it every hour, on the hour,” Doyle said. “And they altered our system so that they felt comfortable letting us operate it for three weeks.”

Doyle isn’t finished after ArtPrize, either.

“Next week, I’m going to New York and building some shipping containers that turn into a big stackable… temple I guess, or just like a building/art experiment,” Doyle said. “We’re eventually going to make like a thousand containers into it, but right now we only have about five of them done and need another eight by Halloween.”

Gon KiRin is headed for storage for now, but come Halloween it will be breathing fire once more, either in Detroit, or Las Vegas.

“We haven’t gotten a call back yet.”