Tuesday, the Grand Rapids Community College Women’s Volleyball Team looked to redeem themselves after suffering their first home loss of the season Monday to Kalamazoo Community College. The GRCC Raiders were ready to do battle at home in the Gerald R. Ford Fieldhouse with the Jackson Community College Jets.

The Raiders came in the game with a 22-5 record and looking to add to it and snap their losing streak. The first set was close the whole way through, no team showing an edge over the other. Midway through the first set the GRCC Raiders put the early game jitters behind them and played flawless, blocking the Jets at every opportunity many of the blocks coming from freshman Abbie Gortsema and freshman Shelby Ruffner. They proved to be a major problem for the Jets. The Raiders showed the Jets that they came to play and took the first set with ease 25-14.

The crowd was behind the Raiders at the start of the second set they could sense the momentum building. The second set started with a bang with a couple of great serves and aces for freshman Sarah Gardner. The set was well in control from the beginning and the Raiders were able to put up an impressive 13 point advantage over the Jets at one point, with the help of Gortsema, Ruffner, and Gardner, they won 25-13.

Everything seemed in control the start of the third set, which could clinch the win for the Raiders. The third set was a close one throughout,  freshman Amanda Glaza had some incredible sets and Gortsema smashed it home. The Jets just edged the Raiders out though 25-21.

“We win as a team, we lose as a team,” said GRCC Raider Women’s Volleyball coach Chip Will. The fourth set proved to be a lot easier for the Raiders. Gardner had some early aces and Gortsema and Ruffner with the blocks and spikes throughout the set, too much for the Jets to handle and the GRCC Raiders won the set 25-15, winning the match, and improving their record to 23-5. “We need to get them comfortable being uncomfortable.” Will said, explaining, that he’s pushing his players to play out of their comfort zone. The GRCC Raiders looked strong and hope to build off this win. “Monday was a tough lost and as a team we played really well,” said Glaza about Tuesday’s win. 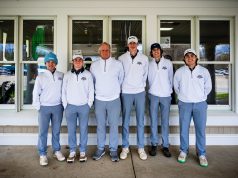