This month Grand Rapids Community College hosted the bi-annual Nations Cup, an international cooking competition in which culinary students were handed “mystery boxes,” containing a random assortment of ingredients. Every team receives the same box, and has access to general store style ingredients. 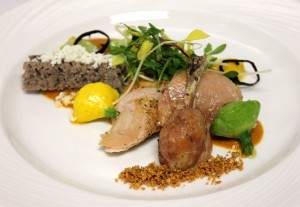 Teams had 90 minutes to create a dish using the ingredients, all while judges were watching. A total of five teams competed this year coming from Mexico, Barbados, Scotland, Canada, and the United States.

“We won a competition called ScotHot just to be able to come here,” Vanessa Daley, 28, Stewarton, Scotland said. “I didn’t know what to expect, but the whole experience has been really good.”

This isn’t the first competition that the City of Glasgow College team has won.

“We won the Restaurant of Nations in March,” Gary Maclean, 41, chef lecturer at City of Glasgow College said. “It’s the biggest competition in Britain. The winners were able to go to London and cook at a restaurant there. It was frustrating because we gave up our time, and they ended up putting us in corners. Just coming here feels more like a prize.”

“We designed it and started it ourselves based upon other national and international competitions,” Program Director Dan Gendler said. “It was a great way to get learning and collaboration between students, instructors, judges and institutions.”

Culinary students at GRCC looking to compete in the event are required to have taken the competition class, and then complete a tryout process in which students cooked in a competition-like setting.

Senior Levi Knoll, 26, of Spring Lake, was one of the two GRCC participants.

“It was cool meeting everyone on the other teams, and from different areas,” Knoll said. “It was fun seeing what the other teams would do with the same ingredients, and to see what they paired the dish with.”

Teams seemed to be in agreement that day one’s appetizer dish was the most surprising.

“I was definitely thrown by the octopus, and baby limes,” Knoll said. “We were all just deer in headlights there.”

Teams arrived at 7:40 a.m. and cooked three dishes throughout the day. On the last day of competition, teams served a five-course meal where each team served one course. Barbados won best of show for their national dish.

Although the Nations Cup is ultimately a competition, the event seemed to bring about more friendships than rivalries.

“We were told it’s a university competition, but we get along with everybody,” said Eduardo Carsolio, 23, of Mexico. “Seeing the different people, cultures, and countries, its been fun. It’s my first competition but it’s been very enjoyable.”

“We’ve been treated like kings. The people provide us with anything we need. It’s been great service.”

This isn’t only an enjoyable event for the students, but the accompanying staff as well.

“This is my third time coming to this competition,” Kevin Boyce, Culinary Arts Program Coordinator, Prince Edward Island said. “This is my favorite event. It’s so well organized and the staff are so friendly.”

“Usually we do internal black box competitions,” Aric Palmer, 21, of Prince Edward Island said. “It’s where we received the ingredients a day beforehand, and were able to prep and think about it over night.”

Even though the pressure was on, Team Canada still enjoyed themselves.

“The whole competition was awesome,” Michelle Matheson, 21, of Nova Scotia, said. “We love it, and it was super fun, exciting, and nerve racking all at the same time. We’re having fun and that’s what this competition is all about.”

Teams were scored on preparation, cooking technique, presentation and clean-up.

“Each team is rated in categories like meat, poultry, and dessert,” Michael Kidder, Associate Director of Culinary Operations for Culinary Education said. “Each team competes against a score or a metascore. Each team can achieve 100 percent.

“There is the best of show designation, where the judges come together and rate which dish was the best one presented.”

After the national dinner, GRCC President Steven Ender took the stage and presented the Nations Cup trophy to Scotland.

“I don’t know if I have the greatest palette for this sort of event, but I thought everything was fabulous,” Ender said. “I’m really proud we do this work. If we wanted to sell 500 tickets for $50 a ticket we could, these guys are that good.”

Jason Babcock contributed to this article.