Grand Rapids Comic-Con had a good problem with its inaugural event Oct. 12: there wasn’t enough room to fit all the attendees in at one time. The 2014 event will be taking place that November, from the 21st to the 23rd, at the DeltaPlex, which is about four times the size of this year’s location.

According to Grand Rapids Comic-Con’s Facebook, the 2014 event will feature a 1400% increase in budget, a three day span instead of one, five to eight Hollywood celebrities, more nationally known comic book artists, an expanded gaming room, and much more. 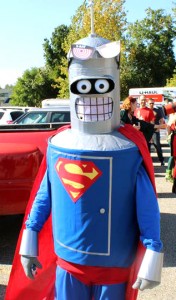 The 2013 Comic-Con took place at the Home School building in Wyoming, where, according to the event’s Facebook page, around 3,500 people attended, and around 2,000 people were turned away, because they quickly reached capacity.

A line, which first began as a few hundred people, soon grew so much that it had stretched past the Home School Building’s parking lot and into the grassy area beyond.

It was a bright sunny day, one where some costume-clad fans had to remove some pieces of their guises to beat the heat, but it didn’t diminish the aura of excitement that surrounded the event.

While the show is much smaller than most Comic-Cons, the obvious demand seen from how many people attended is a good sign for things to come.

“Seeing how many people came this year, I can’t wait to see how big this event gets in the future,” said Zachary Thomas, 19, an attendee from Wyoming.

Advance tickets for the 2014 Grand Rapids Comic-Con will go on sale six months before the event through the DeltaPlex.

Grand Rapids Comic-Con said on their Facebook page that ticket prices are still subject to change.