As Brad Pitt’s character Gerry Lane from the Movie “World War Z” once said, “Movement is life, movement is life.” For the runners of the 2013 Zombie Dash, this advice would be critical for their success.

Zombie Dash is an one-of-a-kind 5k run through a quarantined area of Grand Rapids where runners try to make it to the finish line while dodging hundreds of cityscape obstacles and horrifying zombies trying to steal  two ‘life strips’ given to runners at the beginning of the race. It took place at Ah-Nab-Awen Park and had a turnout of 1,200 runners and 300 volunteer zombies. 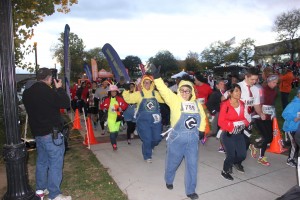 The race was done in three waves as to not overwhelm the zombie horde with victims. The 6:30 p.m. wave took place while the sun was still up, while the subsequent 7:00 p.m. and 7:30 p.m. waves were in done in darkness, adding another layer of intensity to the race.

While volunteers sporting zombie make-up make the race the completely unique experience it is, the runners themselves also got into the spirit of things with their creative costume choices. Runners dressed in costumes such as Zombie Hunters, Fairies, and Minions from “Despicable Me” were flocked around the starting line.

Carol Grysen and Susana Estrada, dressed as the aforementioned minions, decided to participate in the race this year partly for the excuse to dress up.

“Last year when we were down here watching,” Gysen said. “…we thought it looked like a lot of fun, so we decided to do it this year.”

After finishing the race, runner Brandon Schuer was impressed by the course.

“It was crazy out there; there were a LOT of zombies,” he said.

“This is my first year doing this,” said Steve Holmes. “It was a lot of fun out there and I will be doing it again next year for sure!”