By Jessica Langowski and Lauren Winther 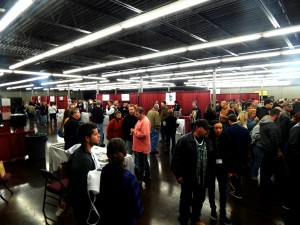 The first ever West Michigan BaCon Festival was held at the DeltaPlex Arena Nov. 2 and 3., 2013 with a large turnout both days.

Upon arrival, guests who purchased tickets online were able to get checked in and were given four beer tickets and six food tickets to sample the various culinary works of art infused with bacon. Individuals who had to purchase their tickets at the door had a five to 10 minute wait.

“I’m not thrilled about the line, but I’m willing to do anything for bacon,” said Aaron Henderson, 23.

As part of the ticket purchasing process, those who arrived with a Kid’s Food Basket donation were able to receive $3 off the original ticket price.

Once everyone was inside, crowds began to form around various booths in anticipation of trying the different bacon and beer samples. David Weeks, 36, was a part of the large crowd.

“When we first got here, there were no lines. We got our drinks first,” said Weeks, “This was a great turnout, especially for it being the first year.”

Many participants had equal reactions to seeing so many people in attendance who devoured the exposure the fest was giving their businesses.

Jon Bezemek, 26, a CityFlats Hotel and City Scene Restaurant employee, said, “We knew that BaCon was going on and we wanted to be a part of it. We always like to be out there in the public eye, so (people) know we’re here and it just sounded like a good event to be a part of.”

The booths and tables wrapped around the rectangular event area two fold. On each table and within each booth were a variety of bacon-inspired dishes, treats, and beers. The food was tongue-tingling tasty and came in a variety of flavors, presentations, themes, and dishes.

“My favorite part was the holiday candy with bacon in it,” said Austin Nixon, 21, a Western Michigan University student.

When asked what he thought of the whole event, Nixon said, “I think it’s awesome. I’ve tried a lot of great foods and beer; this is a college kid’s heaven. I did think the beer could have been more bacon related, but beer is beer. That’s all that matters.”

“The overall atmosphere is great,” said Crystal Henderson, 22, Grand Valley student. “Everyone is very friendly and we’re all just coming together to enjoy something together, so I think that’s really cool.”