Grand Rapids Community College Music Department hosted their second guest in their International Guitar Series on Thursday in the Music Center. The Cavatina Duo, made up by flutist Eugenia Moliner and classical guitarist Denis Azabagic, provided an adventure without listeners ever having to leave their seats.

The husband and wife duo met while they were studying at a music conservatory in The Netherlands. Though their relationship developed quickly, performing together wasn’t something they thought of until later in life. What started out as more of a hobby morphed into a career for both of them.

“(Music and flute) is a combination that matches very well,” Azabagic said. 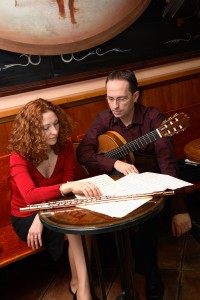 For Azabagic, music attracted him because it presented new challenges. As a boy, school was easy but music always pushed him to do better. Azabagic said that his teacher’s encouragement to develop his own style drove him to practice the craft more. “He was the window to the whole artistic way of looking at music.”

Moliner’s love for music was fostered much later as a teenager. The moment she touched the flute, she felt an instant connection with the instrument. She too described her first teacher as a great influence for her. “I had it inside of me sleeping,” she said. “He woke me up.”

Music has always been an integral part of this duo’s lives. Even as they perform, one can sense the chemistry and the companionship they share as Moliner moves to the music and Azabagic paints a picture while picking the strings of his guitar. The tranquil notes from flute, paired with the smooth tones of the guitar created an excellent night for the audience’s enjoyment.

The night included works from Bach as well as songs from their 2010 release, “The Balkan Project” which features songs inspired by the Balkans, including Azabagic’s home country of Bosnia.

“Music comes out of your fingers and goes directly to your heart,” Moliner said passionately, the love of her craft clearly displayed in her words.

Yet, even with their immense talent and prestigious reputation, the couple remains humble and focused solely on giving others a great performance. When asked about what makes their music so unique, Moliner shook her head, insisting she wasn’t the right person to ask.

“All I want is to be authentic in what I do,” Moliner said. “I’m not aiming to be unique or remembered. The rest is up to whoever is listening.”

GRCC will host the next International Guitar Series concert in February. Visit grcc.edu/guitar for more information.