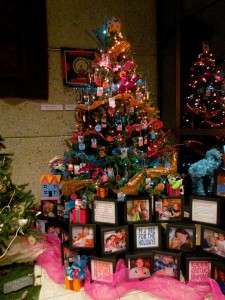 The Gerald R. Ford Museum held their 16th annual Christmas tree lighting last night sponsored by the Salvation Army and Wood TV 8. The 7 p.m. tree lighting held near the doors of the museum included free hot chocolate, Christmas carols sung by the Grand Rapids Choir of Men and Boys, and many faces from around the community. Inside of the museum, 21 themed trees, decorated by groups and organizations were set up for the public to view following the ceremony. Some trees won awards chosen by judges who are not part of the museum, which were announced during the ceremony.

Four trees won an Honorable Mention Award, including: the Deaf and Hard of Hearing Services tree,  Forest Hills Perspiration Preschool, The Kids Food Basket, and Boy Scout Troop 146. The Creative Kids Award was awarded to Brownie Troop 4422 and The Best Theme Award went to Clark Retirement Community.  The Best in Show Award went to the GG Society. A final People’s Choice Award Winner will be announced at 4:45 p.m. on Sunday Dec. 8.

The tree titled “Feeding America”, sponsored by Girl Scout Troop 3804 was one of the 21 trees decorated inside the museum. 10 year-old members Catherine Hilty and Ella Baker recall what they did to participate in this event. “It was a lot of fun, because we got to help people that didn’t have any food and we got to help them so they weren’t hungry and could feed their families,” said Baker.

Hilty talked about how they decorated soup cans, which they did by dipping in glue and then putting into glitter to add to the tree.

Head anchors of Wood TV 8, Susan Shaw and Brian Sterling, attended the event and spoke about helping children and teens by participating in Angel Tree so that “no child and no family is left behind this holiday season,” Sterling said. “The need is so great this year.  The economy may seem like it’s on the verge of coming back, but there are about 30,000 families in West Michigan that could use your help. Please don’t forget them this year.”

“Wood TV has been partnering with Angel tree for 23 years, helping to make sure that children who are less fortunate  receive a gift and the Salvation Army does so much to help families in need. We’re just so honored to be a part of it and get the word out so that people can reach out and make this holiday special,” said Shaw.

A 10 second countdown led to the lighting of the tree, and the song, “Hark! The Herald Angels Sing” was sung by the Grand Rapids Choir of Men and Boys to conclude the ceremony.