The 2014 winter Olympics are already clouded with controversy, and none of it has anything to do with the events, or the athletes competing.

The spotlight is not on Lindsey Vonn or Shaun White, as much as it is on Vladimir Putin, president of host nation Russia. As the games, which will be held in the Black Sea city of Sochi, draw near, Putin is making headlines. Last June, Putin introduced a law banning homosexual propaganda that has caused world leaders to announce plans to symbolically boycott the games. To clear things up, Putin has since clarified that gays will not be rounded up and arrested, saying, “(homosexuals) can feel calm and at ease. Just leave the kids alone please.” 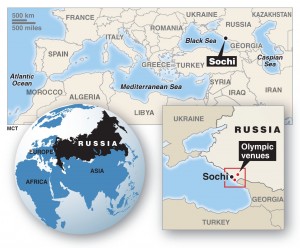 Another significant problem faced by the Russian government is the threat of terrorism. On Dec. 29 and 30, suicide bombs went off in a town some 400 miles away from Sochi. A Chechen warlord has promised to wreak havoc on the games. U.S. Rep.  Mike Rogers, chairman of the house intelligence committee, has expressed frustration with Russia regarding safety issues. Rogers went on CNN’s “State of the Union” recently and told CNN’s Candy Crowley, “I am very concerned about the security status of the Olympics. I do believe the Russian government needs to be more cooperative with the security of the games.”

Putin may not be sharing intelligence information with the U.S. but it is clear that the Russian government is taking the threat of violence seriously. They have deployed tens of thousands of police and military reinforcements to the area, and tightened control inside the city.