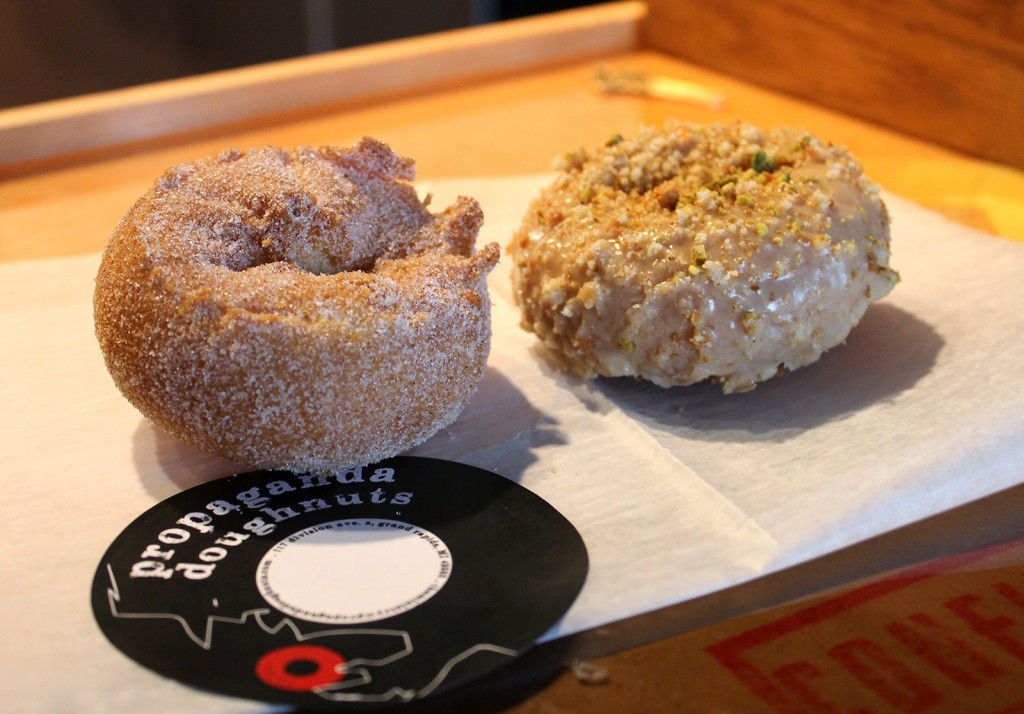 Tory O’haire, owner and head baker, threw out the typical doughnut shop blueprint and swapped in his unique take on the doughnut and progressive business practices.

“One of my goals right from the get-go has been to develop the food scene here,” said O’Haire in his quaint, 1940’s detective-themed shop.

And developing the food scene is exactly what he’s doing.

The menu changes daily with made-from-scratch specialties such as The Corsican (vanilla cake with lavender-lemon icing), The Posterboy (salted caramel), The Smooth Criminal (chocolate cake & coffee ganache) and

Nutella doughnuts, to name a few. The menu also has “the usual suspects” (plain, powdered sugar and cinnamon sugar), which are always available. You can find the menu posted daily on their Facebook page. Every doughnut is trans-fat free and low in saturated fat.

Apart from flavor, the real treat is O’Haire’s passion for sustainable, organic, and local sourcing. “It’s such a buzzword in Grand Rapids to say locally sourced,” O’Haire said. “That’s not so much a selling point; it’s an expectation.”

O’Haire would like to see more shops and restaurants adapt that same idea.

Propaganda Doughnuts not only uses local and organic ingredients whenever possible, but also focuses on sustainable business practices by recycling, composting, and using compostable paper products.

And what about the leftovers?

“We don’t sell any day olds,” he said “…It’s my goal to instead have them all donated.” While the process of donating leftover doughnuts is in development, O’Haire says there are numerous organizations in the area that he would like to discuss giving the doughnuts to.

Despite the high quality ingredients and made-from scratch technique, most doughnuts range from $1 – $2.

“Realistically, we’re not going to make a million dollars here, but if we can be an active supporter of developing a great downtown, why not?”

O’Haire shows no signs of stopping when it comes to developing and supporting downtown Grand Rapids. Propaganda Doughnuts will be an Artprize venue in 2014, and O’Haire also has plans to open what he described as a “late-night ramen bar” next door to Propaganda sometime in the spring. It will be “turn of the century gentleman adventurer style; very Modern Victorian.” O’Haire said he is hoping to have the ramen bar, called The Bandit Queen, opened by May.