More than 200 participants gathered near the Ford Fieldhouse on Sunday for the first ever LaughFest 5K, sporting more than just their athletic wear.

Runners and even a few dogs made their way through the streets of downtown Grand Rapids dressed in their finest undergarments.

Organizer, Wendy Wigger wanted to give more variety to this year’s LaughFest roster.

“LaughFest is all about laughter for the health of it,” Wigger said. “We wanted to give people a variety of different ways to have a seriously good time and we thought, what better way than to run around in your underwear in the middle of March.”

Among the runners was participant Jennifer Lachniet, 41, of Cedar Springs who has also volunteered for LaughFest. She was very excited to run in her underwear as well as help out.

“I don’t run all the time, but I do love their charity runs and helping out,” Lachniet said. “Where else can you actually wear your underwear in public without getting in trouble?”

Another group of runners consisted of David Dyer, 45, and Steve Rogers, 43, who are both performing during LaughFest events.

“We’re actually both comedians taking part in LaughFest,” said Dyer. “We knew about it and decided to come out.”

Aside from comedians and volunteers participating, 18 of GRCC’s very own faculty members dressed up and took part in the run. 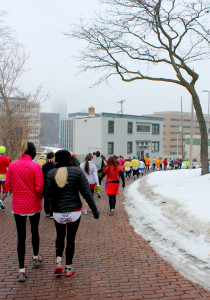 Adjunct professor Monica Stevens was among the faculty runners and she was thrilled to be supporting Gilda’s Club.

“We came out to support cancer research, Gilda’s Club, and be a part of LaughFest,” Stevens said.

“It was a great opportunity to get together with our faculty and staff members at the college,” Laycock said.

After the race, runners were welcomed back into the warmth of the Ford Fieldhouse to participate in contests, including best dressed which went to the FUNder Women, a duo team dressed in all red except their black boxers and black superhero masks.

Following the run, everyone who donated was given recognition as well. The GRCC staff alone raised $2,304 which was more than half the total, over $4,000.

The GRCC staff was able to utilize the campus email and some individually went out and raised money.

According to Fred van Hartesveldt, president of the Faculty Association, the GRCC staff won a prize for all of their hard work raising donations.

“We won a certificate to Gazelle Sports, where we might turn around and auction that and donate that money as well,” said Hartesveldt.