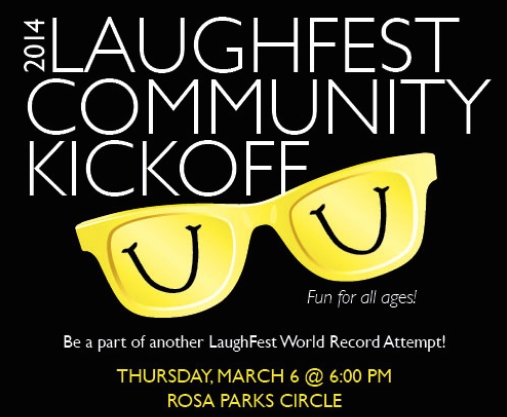 Thursday Gilda’s LaughFest kicks off in Rosa Parks Circle with another attempt to have Grand Rapids’ name in the Guinness Book of World Records. Event organizers are attempting to see how many people they can get to wear sunglasses in the dark at one venue. 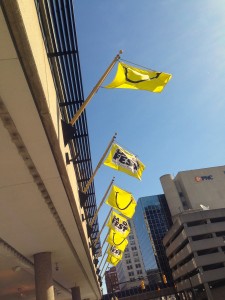 The event includes a photo booth, hot chocolate, and various giveaways throughout the night. All world record participants are receiving LaughFest sunglasses, which are supplied by Baudville.  The world record attempt will be followed by opening night activities at downtown restaurants, and a free comedy preview show.

Free sunglasses are guaranteed to the first 2,500 people who show up, and anyone is welcome to bring and use their own, as they will still be counted. The amount of people participating will be counted by using wristbands and clickers.

Joanne Roehn, LaughFest’s festival director said they continue to do world record events as their kickoff because “Grand Rapids loves to rally as a community and put themselves on the map, and what better way to do this than a Guinness World Record?  This is the fourth year we’ve done it and people love it.”

The current withstanding record for largest amount of people wearing sunglasses in the dark is 1,642 people. This record was made at Wrigley Field in Chicago, Ill.

The schedule for the night is as follows:

In the past LaughFest has achieved other world record events. Last year 1,532 wore fake mustaches to set the record for the largest number of people wearing fake mustaches at a single venue.

In 2012 607 people wore chicken beaks and performed the chicken dance to set the record for the greatest amount of people wearing animal noses. In 2011, 925 rubber chickens were tossed around downtown Grand Rapids, as the previous record was 265 near Boston, Mass.

The free opening night preview comedy show is scheduled to begin at 10 p.m. at the Pyramid Scheme, 68 Commerce Ave. The show includes a sneak peek of local, regional, and national comedians who are featured in the festival. A suggested $5 donation to Gilda’s Club will be collected at the door.

Tickets are also available for the Clean Comedy Showcase at The BOB at 8 p.m. that night. Ticket prices range from $17.50 to $32.50. This includes a dinner.

Fast passes are available for these shows at LaughFest Central, which is at the Grand Rapids Art Museum. The pass will guarantee the holder a seat at the show as long as they are in their seat 15 minutes before the shows start.

The fourth annual Gilda’s LaughFest takes place March 6 through 16. It honors the memory of comedian Gilda Radner, who died of ovarian cancer in 1989.