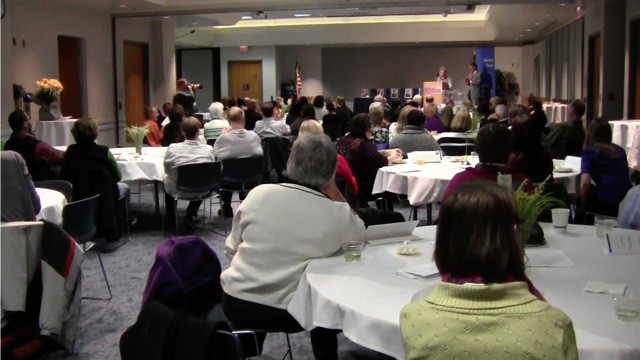 The Applied Technology Center played host to Grand Rapids Community College’s 16th Annual Salute to Women today. The event was first founded in 1999 as a way to honor GRCC’s women during Women’s History Month. Other objectives of the Salute to Women are the celebration of the diversity of women’s accomplishments and the encouragement of young women to pursue success.

Arnold kicked the event off by welcoming President Steven Ender, who was to introduce the nominees. 2014 Honorees include Executive Deputy to the President and Board Liaison Kathryn Mullins, who both attended and now works at GRCC; Teresa Weatherall Neal, an alumna of GRCC who worked her way up to the position of Superintendent of GRPS; Nicole Bowl, a returning GRCC student who has excelled academically as well as in the community with her work at DeGage Ministries; and retired faculty member Elizabeth Foster, who taught in the Life Sciences/Biology Department for over 30 years.

“I have grown as an individual from my experiences here at GRCC, and I will never forget them” Bowl said while accepting the GRCC Student award.