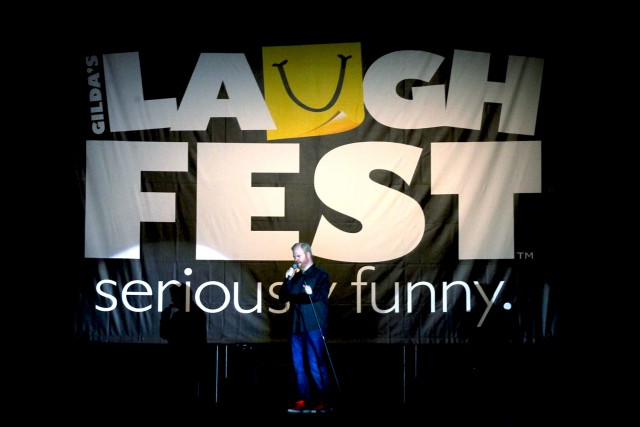 He delighted the audience with new material and his iconic “Hot Pocket” spiel, which was met with cheers. His voice fluctuations and impersonations kept the crowd roaring throughout the performance.

The topic of aging was a strong theme throughout Gaffigan’s performance. Eating healthy to reach a ripe old age is not on the top of his to-do list.

“I don’t want to brag but I’m preparing for a big role… A cinnamon roll,” Gaffigan said.

Fruits and vegetables have lost their appeal as well to Gaffigan.

“Recently I saw an apple and for a moment I didn’t recognize it,” he said. “What is that, an apple? It’s just so weird to see it not in a pie.”

Gaffigan reflected on how its easier to be a man. He observed the routines women have to go through from cutting and coloring their hair to applying lotions, and wearing makeup.

“All men have to do is not have a mullet,” he said.

He is even appalled that women have to wear an extra piece of clothing.

“I think women should not wear bras and then jog by my apartment, because I’m a feminist.”

According to Gaffigan people are like cats. “Cats are self-cleaning, grumpy, and finicky eaters.”

We wish we were like dogs, because they are always in a good mood. He imagines a dog’s internal dialogue, “What is that throw up? I’ll eat it. I’m just happy to be here.”

Gaffigan said he was glad to be in Grand Rapids and trying to figure out if he should go to Yesterdog and speculated about their popularity. “They are famous because their dogs are a day old.”

Gaffigan mentioned the time he spent in the South and his experience with southern food.

“The South will never rise again because they don’t have the energy,” he said.” Because most of their diet includes papier-mâché.”

He is also baffled by how the South combines food for meals, such as chicken and waffles. He impersonated a Southern cook, saying, “What should we serve with chicken? How about french fries? No. Something elegant… waffles.”

Apparently Gaffigan is not a fan of seafood either. He relates lobster and shellfish as creepy crawling sea bugs. Gaffigan raises the question, “What is the difference between a lobster and a giant sea scorpion?”

And he imagines God’s reaction to humans consuming crabs.

“God is up there saying, ‘What am I going to do to get them to stop eating crabs? I put a shell on it and put it on the bottom of the ocean. I even named it after a disease.'”

Gaffigan doesn’t like anchovies either. He asked, “What is the difference between an anchovy and a sweaty eyebrow? Whenever I see one I think some attacked Tom Selleck.”

What Gaffigan does love is Cobi Beef. The secret to this delicacy is that the cow is fed beer and massaged with saki. “I want to be Cobi Beef,” said Gaffigan.

Its not surprising the Ford Fieldhouse was sold out. Gaffigan’s routine is always a crowd pleaser and Friday’s performance was for a good cause. Laughfest is hosted by Gilda’s Club. The laughter these shows offer can be healing, and the funds they provide go to support Gilda’s Club, an organization dedicated to “support children, adults, families, and friends as they find their smile and laughter in the midst of a cancer or grief journey.” For more information about Laughfest or Gilda’s Club head to www.laughfestgr.org