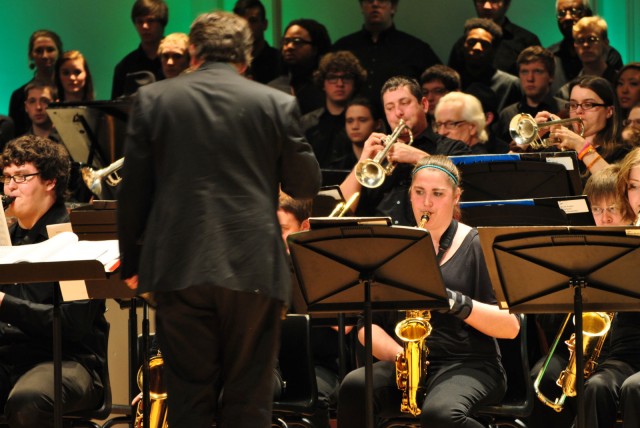 GRCC Music Department showcases their students and what they have learned over the course of the year in their Musical Moods concert. Thirteen groups graced the stage to display their advanced skills and technique. The percussion ensemble was the catalyst of the night’s opening performance. The drums roared throughout the auditorium as the musicians performed three pieces.

As the spotlight shifted to the brass quintet, the sound illuminated the auditorium. James McDonald and Michael Sunday then took the stage and sang “The Princes” as a duet.

The campus band then performed two pieces with flawless syntax.

Although a mere four students played in the string quartet, their rendition of Wolfgang Amadeus Mozart could have been easily mistaken with an entire fleet of strings.

The audience was then graced by David Borgsma and his French horn, who played tribute to Mozart as well.

The performance then shifted to the center of the Royce Auditorium where the World Drumming group provided an eclectic collection of good vibes and even better beats.

The audience was then entertained by GRCC’s Madrigal singers whose voices filled the room with sweet melodies for three compositions. They were followed by Shades of Blue, composed of a sextet of vocalists and few instrumentalists to join them; they showcased two songs for the audience’s enjoyment.

As the night went on, the performances grew larger; the entire jazz ensemble engulfed the stage to perform two pieces.

The night was then concluded with the complete college choir whom filled the stage to perform a collage piece of work made famous by the musical “Wicked.”

This was the first of two nights for GRCCs Musical Moods; faculty had decided to spread this event over two nights to better showcase what the students have learned throughout the year.

“With the two nights the groups can perform for longer than just a couple minutes unlike previous years when we tried to condense everything into one night,” said Professor of Music, Michael Gillan.

With Grand Rapids Community College being the only accredited community college music program in Michigan, potential students state-wide are drawn to it.

Proceeds from the ticket sales go toward the GRCC Music Department scholarships.