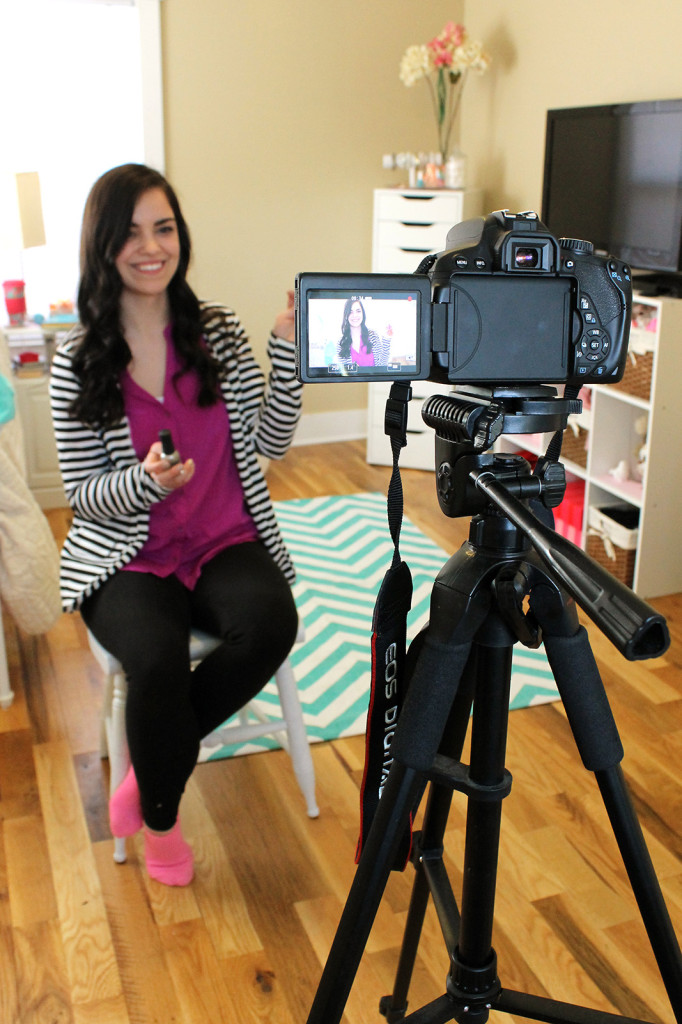 One YouTube search completely changed my life. I was in 8th grade at the time, and just started to get into hair, makeup, and fashion. I was interested in learning new makeup tips, so I searched YouTube for “makeup for middle school.” The results amazed me. There was an entire community of girls making YouTube videos on the same things I was interested in. An array of girls around my age showing themselves putting on makeup and “hauling” their new clothing items lit up the screen in front of me. I watched video after video for hours. I was completely hooked.

The next day, I grabbed my parent’s point and shoot camera and made my first video. With braces and an extremely awkward hair cut (the typical 8th grade cut at the time, where your bangs were almost completely covering one eye), I made a video about how to double loop a jelly bracelet. That video, as embarrassing as it is now, launched my YouTube career.

Five years later (and without braces or a haircut that impairs my vision), I have grown my YouTube channel, Makeup By Kimm, to over 80,000 subscribers to my channel and nearly 6 million views on my videos. I’ve had amazing opportunities, and been able to work with brands such as L’Oreal Cosmetics, Aeropostale, and Tervis. I’m networked with a company based out of Los Angeles, and YouTube has become my job.

I often get questions from people who are interested in possibly starting a channel of their own. Through my own YouTube journey, there are a lot of things I’ve learned from trial and error. In the past five years, I’ve owned about five or six different cameras before I finally chose the “right” one. I’ve also had to deal with rude comments on my videos and learn how to react to negativity. If you’re interested in starting a channel of your own, there are a few things you’re going to need to know. It’s important to focus on getting the right equipment, put forth interesting content, and get viewers for your new channel.

The equipment that you use to film is important. Think about what type of video you’d rather watch: one with poor lighting and grainy quality, or a well-lit video with the clear audio? Most people are going to want to watch a video of higher quality. However, this does not necessarily mean that you have to spend your entire life’s savings to purchase camera equipment.

Most Basic Option: If you’re not willing to invest much (or any!) money to the start of your YouTube channel, that’s completely fine. There are a lot of people who make great, popular videos and don’t have an $800+ camera and a set of studio lights. The most important thing you need to focus on is utilizing natural light. Film in front of a window during a sunny day.  You can easily use a webcam or an inexpensive point-and-shoot camera as long as you have good lighting. Also, instead of buying a tripod, you can make your own by stacking books or boxes – get creative! This option could potentially be free if you already own a computer with a webcam or a point-and-shoot camera.

Moderate Option: If you’re willing to invest a little bit into this endeavor, I would recommend buying a nicer point-and-shoot camera or a digital single-lens reflex (DSLR) camera either new or used on Amazon. If you’re buying the camera used, make sure to read the description and ensure that the seller has good feedback. Buying a camera used instead of new can be a great way to save money.

For this option, I would also recommend utilizing natural light. If you’re unable to film during the day or if you don’t have a window that lets in a decent amount of light, buying “Cowboy Studio” brand studio lighting off o 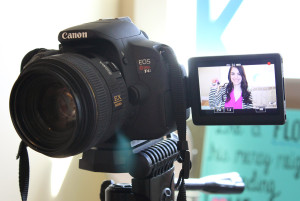 f Amazon will only set you back $50 or so. I’ve had this brand of studio lights for about two years and they’re still holding up well. Inexpensive tripods are available off of Amazon or eBay, or if you’re able to stack books or boxes to make your own tripod, that can help cut costs.

Serious Option: For those who are interested in investing more into their YouTube start up, there are some great equipment options. After trying many point-and-shoot cameras, a couple of camcorders, and two DSLR cameras, my absolute favorite for filming has been my Canon Rebel t4i. I would recommend buying a camera with a flip out viewfinder so you’re able to focus the camera yourself rather than having to have someone else focus it for you. If you’re going to buy a DSLR camera, you can buy the body only and then invest in a better lens instead of wasting money on a lens that comes with the camera that is not the best for filming. My personal favorite for filming has been my Sigma 30mm/1.4 lens. I bought it used off of Amazon for a little over $300. New it retails for closer to $700. This lens is very good quality and a great investment piece for filming.

Variety: As far as content for your channel, it’s incredibly important to focus on whatever you’re passionate about. For me, that’s fashion and beauty. Focus on what you’re most interested it, whether it’s comedy, video games, cooking, or just about anything else. The possibilities are endless.

Also, don’t feel like since your YouTube channel is a comedy channel, you can’t do anything else. It’s your YouTube channel and it’s important to remember that you’re the one in charge of it. While it’s important to remember who your intended audience is, you should still let your channel be a reflection of you. For example, occasionally I make “do it yourself” videos on my YouTube channel and talk about other things that interest me, such as home décor. While sometimes my normal audience isn’t always going to click on those videos, it can help me get new viewers who enjoy my video about room décor, and also might enjoy my normal videos about fashion and beauty.  It’s great to be able to be in complete control of my content and film videos on whatever I’m interested in.

Be Unique: Once you figure out what you want your channel to primarily focus on, it’s smart to watch other YouTubers’ videos who make the same types of videos so you can get a feel for what’s available already. However, you should never try to alter your personality, your set up, etc. to be the same as another YouTuber.  Viewers will see through this right away and they may not be gentle with their reactions. Viewers often get very upset if they feel that you “copied” another YouTuber in any way. It’s important to have your own ideas and your own unique touches to your videos. People often do not want to watch someone who seems just like everyone else, and if you can explain or present things in a different way, that will be a great selling point for you.

Be Consistent: When you’re getting started with your YouTube channel, it’s especially important to be consistent with your frequency. Some people find it easiest to make a schedule for their videos and share it with their viewers. For example, choose a day of the week that’s most convenient for you and stick with it. Ending each video with a reminder to your viewers (such as: “Tune in next week Thursday for my next video”) will give your viewers something to count on. If you always upload on Thursdays but for some reason one week you’re unable to, post on any social media pages related to your YouTube channel that you’re going to be a little late. You want your viewers to be able to count on you. If you put up three videos in one week and then nothing for a month, viewers may not subscribe to your channel or continue to watch your videos because of your lack of consistency.

When you first make your channel, you can’t expect everyone and their mother to immediately start watching your videos. Building your channel takes time and it’s important to have the right equipment and content before you’re going to be able to build an audience. To grow your audience, you’re going to need to be realistic, learn to network, and know how to take criticism.

Be Realistic: Gaining viewers is going to take time, and sometimes it’s difficult to be patient. You’re probably not going to get to 1,000 views per video the first month you make your channel. Do not be discouraged. Keep putting up videos and working hard. It shouldn’t be all about the number of views. Also know that you have to seriously build up your channel before you’re going to be able to make any money doing YouTube videos. It’s not a matter of simply making the videos, you have to be marketable as well.
Network: On YouTube, making friends with other people who are making videos similar to yours is extremely important. You should never suck up to people or pretend to be someone’s friend, but leaving comments on other people’s videos about what you liked in the video or replying to their tweets on Twitter can help you make friends with people who can give you advice and help grow your channel. Always be genuine about this, and make sure it’s not forced. Once you start making friends who make YouTube videos similar to yours, you will likely get opportunities to collaborate and help each other out by sharing viewers.

Learn How To Take Criticism: There are always going to be trolls. My freshman year of high school, I made a video featuring a hair, makeup, and outfit idea for homecoming. I worked extremely hard on this video and spent hours editing it. A couple days after it posted, someone commented on the video that I looked like I had gained weight. As a 15-year-old girl, this comment was absolutely devastating to me. I remember being so upset and considering taking down the video because of it.  After hours of contemplating, I decided to leave it up and ended up getting a lot of really great feedback on the video afterwards. There are always going to be people who don’t like you or what you’re doing. Instead of verbally attacking these people back or crying about it, learn to let it go and move on. Not all criticism is constructive, and you shouldn’t let every comment define how you feel about yourself or what you’re doing. 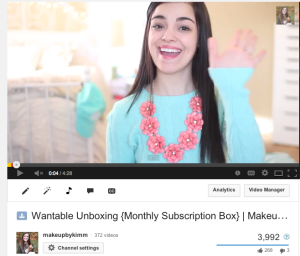 Starting a YouTube channel was one of the best decisions I’ve ever made. It has molded my life to becoming what it is today and gave me countless opportunities and benefits. Saying that I’m a professional YouTuber was kind of strange at first, but now I’m very proud of my accomplishments. Your channel is probably not going to grow insurmountably overnight, but if you’re willing to work hard and have fun with it, I would encourage you to make one and see where it takes you.