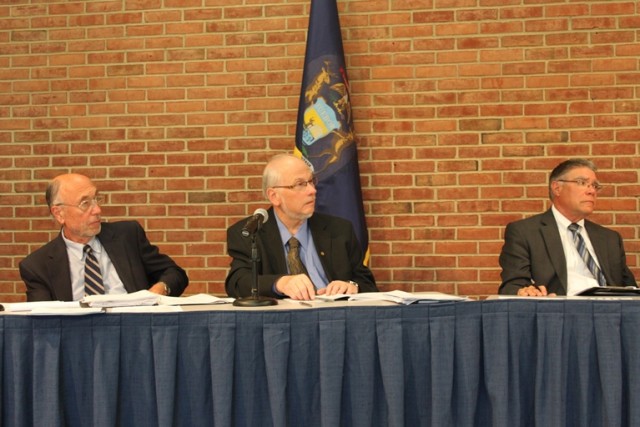 The Grand Rapids Community College Board of Trustees voted to approve the 2014-15 budget June 16. The budget does not include programs like the Diversity Lecture Series and Actors’ Theater, that have been funded by the college in past years.

GRCC’s Finance Department was dealing with a $3.3 million deficit when trying to balance the budget. As a response, the board did not approve increases to exempt administrative salaries. GRCC President Steven Ender’s salary will also stay the same, at $211,055, but the board did approve Ender’s $12,000 annual annuity that has been a part of his contract for some time now.

“No one’s salaries will increase,” chairperson of the board, Bert Bleke said. “The President’s, exempt and administrative salaries all stay the same. President Ender’s annuity is one thing that is part of his contract.”

President Ender introduced GRCC’s new Chief Information Officer, David Anderson, at the meeting. Anderson was put to work almost immediately, when a powerpoint presentation failed to show up on the projection screen at Sneden Hall.

“I had the pleasure to announce to the campus community last Friday that David had accepted the role of Chief Information Officer,” President Ender said. “I am very delighted… David has been with our IT department for over 20 years. He is well respected by the staff [in IT] for many different reasons.”

President Ender went on to list more reasons why Anderson was the best choice for the job.

“If any portfolio needed a stabilizing force right now, it’s IT,” Ender said. “David Anderson is that stabilizing force… He brings both the intellectual ability to manage a broad complex portfolio, but also, I think perhaps more importantly, the people skills to manage the exchange between IT and all the folks that program provides service for… as I said to David and the staff, this is the last IT head guy I am going to hire. So he better plan on sticking around.”

The Student Success Indicator Report provided a glimpse at one of the ways GRCC is on the forefront of innovative thinking. Associate Provost Patti Trepkowski presented the report on graduation yield.

“This is the percent of all students attending [GRCC] who earn a certificate or degree within an academic year,” Trepkowski said. “We’re looking at this because we think it’s an alternative way of reporting graduation rates that gives a different sort of information than the three-year cohort that we’re used to looking at.”
The three-year cohort is a metric using statistics on first-time, full-time students who graduate within three years. With the number of students enrolling at GRCC out of high school continuing to drop the definition becomes narrower every year.

“We were at the ceremony, right before graduation, where we were honoring the students in the top five percent,” Ender said. “It’s really, at GRCC, not a class. We had a student that came back from Florida, thirty years later… getting a degree and we had many students… were here for 8, 10, 12, 15 years. This [new metric] captures more of our success than the typical three year graduation rate or six year graduation transfer rate allows us to capture.”

This new method, along with the data comprised of three-, six- and eight-year graduation rates, has provided GRCC with a clearer idea of the success and percent of students who go on to graduate, no matter how long it takes.

Omicron variant a cause for concern in the U.S. as first positive case is confirmed in California