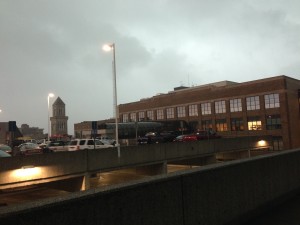 Thunderstorms rocked West Michigan early Wednesday morning. The first round arrived on shore in Ottawa and Muskegon counties around 3 a.m., leaving thousands in Kent and Ottawa counties without power. Pea to quarter size hail was reported in the Byron Center area.

Over an inch of rain fell at the Gerald R. Ford International Airport according to a National Weather Service observation station. Other reports indicate more than 4 inches of rain fell across West Michigan Wednesday Morning

The second round of thunderstorms arrived in Greater Grand Rapids around 1p.m. bringing torrential rains and intense lighting.

Portions of Kent County were under a Severe Thunderstorm Warning for winds moving into Downtown Grand Rapids as strong as 60 mph and penny size hail.

According to the GRCC Facilities Departments, the campus is currently operating on backup generator power and working with Consumers Energy to restore power. As of 2 p.m. the Consumers Energy Outage Map estimates power will not be restored until Thursday at Noon.

Classes for Wednesday that begin at 4:30 p.m. or later have been cancelled. The Calkins Science Building, Ford Fieldhouse, and the Student Center will be closed to the public for the rest of the day.

For the latest on Consumers Energy outages, visit the outage map.