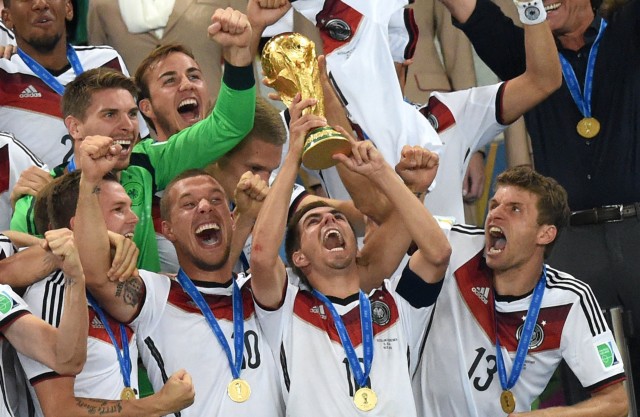 The 2014 FIFA World Cup commenced on June 13 in Brazil. As with every World Cup, there were a myriad of top moments, some good, some bad, along with some fantastic goals.

If not for the sweltering heat and humidity in Brazil, The Germans might not have broken a sweat. Germany ran through the group stage with relative ease, barring a 2-2 tie with Ghana, and advanced to the knockout rounds top of the group. The Germans then beat Algeria 2-1, France 1-0, Brazil 7-1, and defeated Argentina 1-0 to become world champions.

Faced with the tough task of being in the ‘group of champions,’ someone needed to tell Costa Rica that they weren’t supposed to win the group. Costa Rica defeated Uruguay 3-1, Italy 1-0, and tied England 0-0. They advanced to out of the group stage to beat Greece 0-0, 5-3 on penalties, but then fell to third-place winners Netherlands.

Another team that surprised some fans was Colombia. The Colombians were lead by James Rodriguez, the eventual Golden Boot award winner (lead tournament in goals). Advancing from probably the weakest group in the tournament the Colombians became a fan favorite for doing a group dance when they scored. Colombia went on to defeated Uruguay 2-0 in the round of 16, but falling to Brazil 2-1 in the quarterfinals.

Before this year, not many people knew that Miroslav Klose needed two goals to pass the legendary Brazilian Ronaldo’s 15. Miroslav scored the tying goal in the 71st minute against Ghana, and scored the record-breaking goal against against Brazil in Germany’s 7-1 manhandling of the hosts.

U.S. goalkeeper Tim Howard had already had a spectacular World Cup campaign, but little did he know that his game against Belgium would put him into the record books, and earn him ‘legendary’ status. Tim Howard came up with 16 saves against Belgium in the USMNT’s 2-1 loss in the knockout rounds. Howard broke Peru’s Ramon Quiroga’s 1978 record of 13 saves.

Having already sunk his teeth into two other players in his career, Luiz Suarez couldn’t actually bite someone for a third time could he? Well, he did. The Uruguayan entered the final group stage game against Italy needing to lead his team to a win in order to advance. Uruguay eventually won, but the game was overshadowed by Suarez’s 80th minute chomp of Georgio Chiellini.

Entering the semifinals without their two best players, Neymar and Thiago Silva, the Brazilians were still expected to provide a competitive match. That didn’t happen, as the Brazilians were disposed of easily in a 7-1 dominating performance by the Germans. Embarrassingly, the Brazilians allowed five goals in 30 minutes, with Oscar scoring a last minute consolation.

3. Spain, Italy, and England all flame out

The 2010 World Cup winners Spain, 2006 winners Italy, and european power England, were all expected to show up and compete at this year’s World Cup. They would have been better off staying at home. Combining for two wins between the three teams, the european perennials left the tournament just as it was beginning. Only Italy had something to play for in the final group stage match.

As Netherlands went to penalty kicks against Costa Rica, former Netherlands manager Louis Van Gaal made a substitution, and brought on 6-foot-4 keeper Tim Krul. Krul, being taller than the first-choice keeper would have an edge when it came to the lottery kicks. Before the Costa Rican players took their spot kicks, Krul came out of his box to intimidate and trash talk the penalty takers. Against the rules, Krul should have seen a yellow card and been sent back to his line.

In a tournament supposedly made to be the international coming-out party for Lionel Messi and Cristiano Ronaldo, the two were pretty anonymous at the World Cup. Ronaldo more so than Messi, as the Argentinian was able to score four goals, but not provide the influence that was expected of arguably the world’s best player. The other world’s best player Ronaldo, was only able to score one goal, and not get his team out of the group stages.