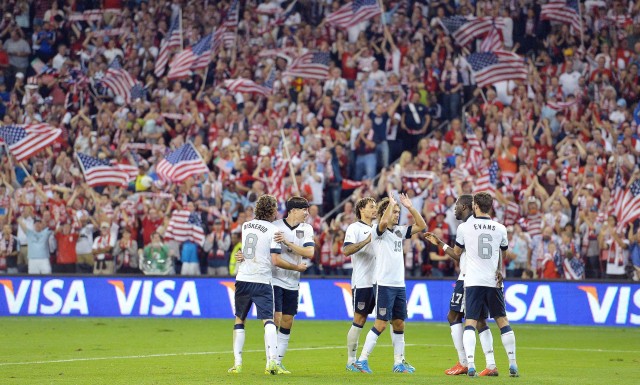 The 2014 FIFA World Cup kicked off on June 12 with a game between Brazil and Croatia. The Brazilians went on to win 3-1, while the United States Men’s National Team needed to wait until June 15 to start their World Cup run. In order for the cup to be considered a success in the eyes of the fans and pundits, the United States needed to reach the knockout stages.

Before the World Cup even began, United States Men’s National Team coach, Jurgen Klinsmann, came out and told American fans that the U.S. winning the World Cup wasn’t “realistic.” Placed in Group G, dubbed as the ‘group of death,’ any full-blown soccer fan would probably agree, albeit reluctantly.

Klinsmann took some heat for the statement, as most American sports fansbelieve that there is always a chance. That there is an injured Kerri Strug vaulting to Olympic glory, or 1980 Miracle on Ice waiting to happen.

The USMNT’s tournament began as if that might happen though, taking the lead in their first game against Ghana, a team that had beaten the U.S.the two previous meetings. Clint Dempsey’s opening-minute strike was able to sneak past the Ghanaian keeper and go in off the right post.

Ghana then took control of the game, bringing wave after wave of attack towards U.S. goalkeeper Tim Howard. Ghana finally had its breakthrough in the 82nd minute after Andre Ayew’s left footed shot found the bottom left corner from about 12 yards out.

In the 86th minute, 21-year old U.S. defender John Books and brought on as a substitute, rose up in the center of the box and put Graham Zusi’s corner kick into the back of the net. The U.S.had a 2-1 win, its first three vital points of the tournament, and shrugged the Ghanaian monkey off its back.

In its second game, the USMNT took on Portugal, a team that had received a 4-1 thrashing, courtesy of Germany. Portugal was missing its best defender, Pepe, who received a red card in the game against Germany. With a win, the U.S. would automatically advance to the knockout rounds.

The game started poorly for the U.S., falling behind in the fifth minute to a Nani shot from the right side, after failing to get a good clearance of the ball.

The U.S. needed to wait until the 64th minute to bring the game even. Jermaine Jones, another German import player, received the ball from a Portugal defender’s mishit, took three steps towards the center of the pitch, and let out a curving wonder-strike. The ball wound around a Portugal defender and left the goalkeeper standing in bewilderment.

In the 80th minute, the U.S.found itself on the front foot again. Graham Zusi crossed in an attempt from the right side of the box, which found Clint Dempsey, who was able to put the ball into the back of the net and gave the USMNT a 2-1 lead.

The outcome was nearly history, until the 95th minute, in which midfielder Michael Bradley got caught in possession,and was stripped of the ball by four players, the ball found it’s way to arguably the world’s best, and most attractive player – Cristiano Ronaldo.

Ronaldo sprinted away, ball at his feet, and let out a lethal cross that found the head of Silvestre Varela, who the ball into the bottom right corner to even the score at 2-2. Tim Howard had no chance, and the U.S. team was visibly distressed.

After tyinga game that the whole country felt was a loss, the USMNT would need to rebound against a German squad that came into the tournament as one of the favorites, and eventually became champions. Team USA still held control of its own destiny, a win or tie would them through to the knockout rounds.

The game began, and the difference in terms of quality was obvious. The Germans went forward, over and over again, each time presenting something different in terms of a quality chance. The Germans dominated the ball, controlling possession 63 percent of the game, tallying 13 shots, nine of which on goal.

The German breakthrough came in the 55th minute, as Thomas Muller’s curling effort from outside of the box found it’s way through the U.S.defense, and once again, leaving Howard with no chance. Team USA went on to lose the game 1-0, without much of an offensive effort.

The USMNT’s future was in doubt, as they needed a positive result from the Portugal – Ghana matchup being played at the same time. Millions of Americans were in tune with the numerous results needed for the US to advance. Luckily for the American team, and fans, Portugal’s 2-1 win over Ghana was one of those results.

Team USA had officially advanced to the round of 16 to face Belgium, a team that had won all its games, but hadn’t quite found its form. Belgium was a team coming into the tournament with high expectations and some quality young talent. With the likes of Romelu Lukaku, Eden Hazard, Kevin De Bruyne, and a class keeper in Thibaut Courtois, the Belgium squad was primed for a World Cup run.

From the opening whistle, Belgium came out and dominated, peppering Howard with shot after shot.

Howard held strong though, and gave the US a chance to win it late in the game. Chris Wondolowski came on in the 72nd minute for Graham Zusi, and stayed quiet until the second-half extra time.

A cross came in, and Wondolowski timed his run perfectly. Onside and mere feet from goal, Wondowloski shot his close-range effort, that surely would have won the game for the US, over the bar. The only chance the US obtained in that first 90 minutes had been wasted.

With the score sitting at 0-0, extra time began, and right at the start Belgium wason the attack. Belgium’s breakthrough came in the 93rd minute, when Kevin De Bruyne latched on to substitute Romelu Lukaku’s pass and was able to put it past Howard.

Belgium, with more confidence than ever, kept pushing forward. They got another goal, this time from Lukaku, on De Bruyne’s pass. Lukaku’s left footed shot from the center of the box beat Tim Howard to the top left. The USMNT’s World Cup hopes were slowly wilting.

Klinsmann then used his third and final substitution to bring on 19-year-old German born forward Julian Green right before the end of the first extra time period. The change provided the U.S.with the spark it had desperately needed.

The U.S.poured forward, needing two goals to bring the game to penalty kicks, where anything can happen. Courtois held strong though, thwarting whatever the U.S. presented him. In the 107th minute, Michael Bradley’s looping through ball found Julian Green who was able to one-touch the ball past an oncoming Courtois.

With the score 2-1, the U.S. had 13 minutes to tie the game. The team pushed forward, trying to even the score at two, but the Belgian defense held strong, and repelled the U.S. attack.

On the stroke of the 121st minute, the game ended, and so did the USMNT’s World Cup. Even though Howard made a World Cup record 15 saves, the U.S. couldn’t get enough offense to defeat the Belgians.

In four years time the soccer fever will return, as will the USMNT’s chances at another World Cup. The squad will be younger, and probably without Howard and Dempsey, but the future is bright with budding players like Deandre Yedlin, Julian Green, and John Brooks.