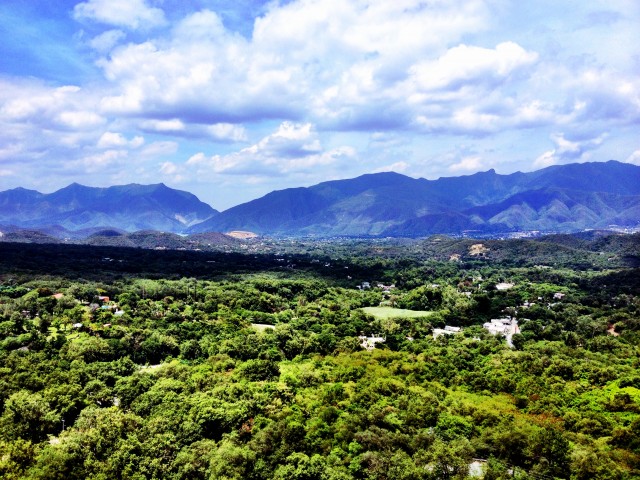 During month of June this past summer, I had the absolute privilege to spend 32 days in the beautiful mountains of Monterrey, Mexico. There I worked in an internship position, where I traveled to different children’s homes to support the staff members, organize fun activities for the kids, and help facilitate group activities between the children and group members that came to visit on mission trips. Being a Spanish major, I’ve been fascinated by the Latin culture for years, and I have a huge passion for ministry. This internship helped me develop an even deeper love for both.

I was able to see both the beautiful, and ugly first hand while I watched these children over those four weeks. I experienced the rich life that many citizens of Monterrey are blessed with. They have a booming downtown area, a great art scene, and a rich cultural view to offer. Yet, there is a downside. Only 45 minutes away from the beautiful downtown, you will find hundreds of people living in impoverished communities. Most of the homes in these squatter’s villages do not have working electricity and lack of resources – even for something simple as personal hygiene. The unfortunate reality is that many of the children who are born in these impoverished communities are later dropped off at the children’s homes that I served in.

In the children’s homes, I saw indescribable joy on ayoung girl’s face as she was reunited with a close friend after a long year of separation. I witnessed a 6-year-old boy go through the deepest bout of depression I’ve seen in a child. I laughed, I cried, I was moved by the simplicity of these little ones’ lives. I found that these children were desperate to believe that even in the darkest of circumstances there is reason to hope.

Transitioning back home after those long weeks away has been a tough challenge. My life in Mexico consisted of selflessness and being faced with life and joy, pain and suffering, on a daily basis. At home in Grand Rapids, my biggest problem seems to be not getting a good enough parking space in the Bostwick parking ramp. It’s a harsh reality when all the comforts of home are suddenly ripped away, and then brought back to your life. You realize just how terribly good we have it.

This awareness of how rich my life truly is has changed my perspective greatly on simple matters such as complaining about a slow iPod, to greater ones such as the immigration issue that our country is facing right now. Over the past couple of months, thousands of unaccompanied children have been flocking from Central America to cross our borders in the hopes of a better life.

The American response to this influx of immigrant children has been anything but simple. There is always gray in matters that are meant to be black and white.

Many Americans have insisted on sending these kids back. They point out that the drug cartels and the gangs that are so prevalent in places such as Honduras, Guatemala and El Salvador have exploited many of these kids’ desperation, and used them to transport their own product across the border. Some insist that our economy cannot support so many immigrants when it fails to support its own citizens.

Others counter that these children can in fact support our economy. There are several polls out there in different parts of our country that support housing and sheltering thousands of immigrant children.

Often, in situations like this, I’m faced with this simple question: what is right and what is wrong?

I’ve read the statistics, studied the numbers, and have considered both sides. What I believe is that we Americans are failing to realize as we debate the numbers and compare findings is simply that these are not just numbers of faceless immigrants. These are lives. Little kids with families, dreams, and nightmares that were very much the reality when they were living in their own homes. Many of these numbers represent frightened and desperate children searching for a way to keep hope in their own dark situations.

Yes, life here will not be perfect for them, should they have the opportunity to stay. But they come from homes broken by gang violence, the threats of being forced into the sex trade, and the danger of becoming ill by sicknesses due to a lack of basic hygiene. Coming to America becomes a beacon of hope, a reason to stay sane.

Though I won’t even try to pretend to know all the complexities of immigration laws and regulations, and I realize that one month in a Latin country does not make me an expert on the plight of the orphan child. Yet, I will challenge those of us to think about what we’re really demanding from the government, when we ask to send these kids back. At the end of the day, whose lives are we truly concerned about?