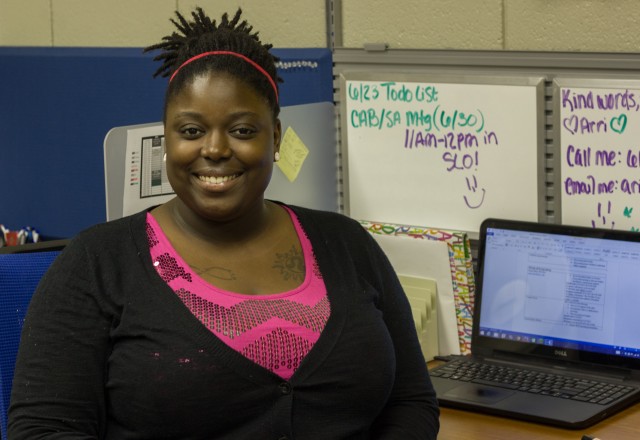 The group originally was disbanded in fall of 2012 due to the excessive fighting among the officers in the group. After spending two years rewriting their constitution, Student Alliance is ready to launch the new student government at GRCC this fall.

Since this is the first year Student Alliance is in session, the members of the group were hired in three different rounds to fill the four executive board positions. In the future, members of the executive board who aren’t re-applying for positions will be interviewing those who applied for positions, along with an additional faculty member and the group’s advisor, Sara Dorer.

“Basically this year is a trial run for us to see how things will go,” Brown said. “We don’t have the constitution like we did before, we just have guiding documents. It lays out our job, purpose, and how we operate is more open to change than what it was before.”

“Our goal this year is to let the students know we are here,” Brown said. “Let them know that they can get involved with us. This year is definitely more student focused.”

Joshua Vissers, Communications Director of Student Alliance said the budget for the group would not be announced until enrollment is confirmed after the semester begins.

“Our budget depends on enrollment,” Vissers said. “We are waiting, as we will be changing the budget. At our first meeting of the fall semester we will approve the budget.”

Duties of the group include coordinating the student food pantry, speaking with administrators, and working with other clubs and organizations to put on events at GRCC.

“We plan on… bringing in President Ender and a trustee member [in October.” Brown said. “They will be speaking about the importance of voting. We are also going to have some voter registration days.”

Student Alliance meetings are open to everyone on campus, and the group also plans to attend GRCC Board meetings, as Student Congress did in previous years.

“When I heard that Student Congress had disbanded, and there was some tension going on, I thought it would be a good time to get on board, because we can start new, with a new outlook,” Brown said. “Being a part of the student government means I have more ownership over my school, and the things I do in my school. It means so much to me.

Meaning I can be a representative of my school. I can truly say I am a student leader.”

The group’s advisor, Dorer, is excited for the upcoming year.

“My hope is that they will generate new interest on campus about what it means to be involved in what is happening on campus,”

Dorer said. “The goal would be that they are holding meetings that are relevant to the concerns students have, allowing a place to be heard and to know someone is looking into things on behalf of the student body. Additionally, I hope they can use their roles as leaders to bring information to the students that may help improve student success on campus.”

Dorer also said she was not worried about budget cuts affecting the group.

“As with any new organization or structure, there will be kinks we need to work out I am sure, but we have a solid leadership board,” Dorer said. “They have a solid plan for the year and I believe they want to see this organization succeed. Most of what happened in the past is now forgotten by the students, but was a learning opportunity for the organization. Their new model is a big shift, so I think they will work hard to develop it and watch it grow.”

Student Alliance’s public meetings will be held from 2 to 3:30 p.m. on the first Thursday of each month while the semester is in session. They will be hosted in the multipurpose room on the 2nd floor of the Student Community Center on GRCC’s campus.